“Sanctuary Churches” Are the New Refuge for Undocumented Immigrants 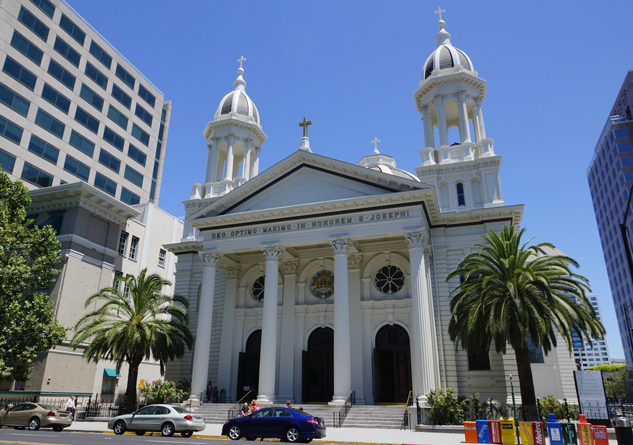 Churches across the Bay Area and the country have come to the protection of community members as “sanctuary churches”. Photo Credit: CC BY 2.0/flickr/Allie_Caulfield
by ElObservador 04/14/2017

During these times of uncertainty in the immigrant community, there seems to be one place where they feel safer, their church. The immigrant community has a history of turning to their churches for any type of support, especially for shelter during rough times. Such is the case of Jeanette Vizguerra, a mother of four who after checking in with immigration and Customs Enforcement was given a deportation order.

Ever since Vizguerra was given this court order for deportation, she found refuge at a church in Denver, resisting deportation. Her case has gotten national attention as these cases are more common and more people are finding a safe home at their local church. However, not all churches are willing to protect immigrants from ICE.

The Bay Area differentiates itself from many states which have no safe havens for immigrants. The lessened tensions here come from a nearly universal approach to the state’s relationships with it’s immigrant community. The recent Sanctuary bill passed in the assembly certainly helps, yet there continues to be fear.

Which is why churches around the Bay Area have proclaimed themselves to be “Sanctuary Churches”. One of these churches is La Primera Iglesia Presbiteriana Hispana in Oakland.

Elsa Vasquez has been living in the U.S. for 18 years after leaving her beloved Michoacán for a better life. 16 years she has been residing in San Jose and has been attending every Sunday to Our Lady of Guadalupe church in East San Jose. Even though she has tried to become a U.S. resident, she says it has not been easy and hasn’t been able to become legal.

“It’s been too long, but I’m not going anywhere…this is my country, I’ve been here longer than I ever was at my home country,” said Vasquez in Spanish. Therefore, she said that if she had to hide from ICE the first place she would go to is her church, Our Lady of Guadalupe. “I wouldn’t think twice, I would be much safer and I know they wouldn’t come looking for me here,” Vasquez said.

“We’re just doing what we’ve historically done as churches…provide a safe refuge for a family or an individual that has found him or herself in a situation where there is no other recourse for them to deal with that,” said the Rev. Jon Pedigo, director of projects for peace and justice for the Diocese of San Jose in an interview to the Mercury News.

But how far can a Sanctuary Church go to defend its parishioners? Legally ICE can arrest any person who is undocumented anywhere, even if they’re in a church, said Melisa Hernandez, a law student at Santa Clara University. However, it’s known that ICE officials don’t like to enter churches to arrest people, they can, but they haven’t done so yet.

Just like Vasquez, there are thousands of undocumented immigrants that would turn to their churches for refuge. According to the Public Policy Institute of California, it is estimated that 400,000 undocumented immigrants live in the Bay Area. Hector Castellanos, a parishioner at Our Lady of Guadalupe adds, “I know the church would protect me…God never leaves us alone.”