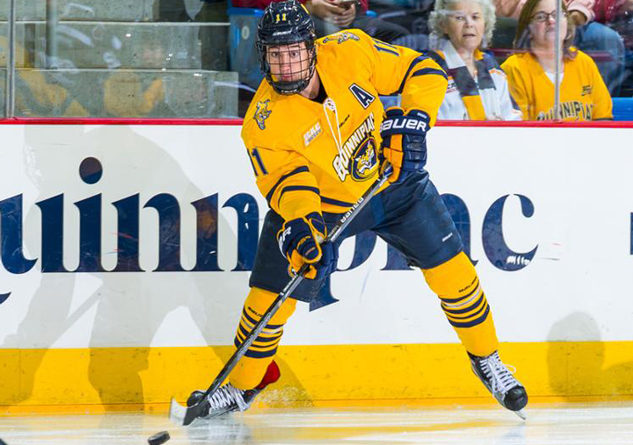 Forward signed to two-year contract, will report to SJ Barracuda

SAN JOSE – San Jose Sharks (@SanJoseSharks) General Manager Doug Wilson announced last week that the club has signed unrestricted free agent center Tim Clifton (@tim_clifton) to a two-year contract. Per club policy, terms of the deal were not disclosed. Clifton also signed an AHL ATO for the remainder of the 2016-2017 season and will report to the San Jose Barracuda of the American Hockey League.

“Tim is a skilled, feisty forward who excels in the face-off circle and we’re excited he has chosen San Jose amongst the many suitors he had,” said Wilson. “We feel our club has a strong track record of providing an environment where undrafted free agents can prosper and make an impact at the NHL level, and we are confident that Tim has the ability to follow that mold. We also want to thank and congratulate Quinnipiac Head Coach Rand Pecknold and his staff for their hard work that has helped Tim grow and succeed as a young hockey player.”

Clifton, 24, recently completed his senior season with Quinnipiac (ECAC) where he served as an alternate captain. He finished as the team’s fourth-leading scorer with 25 points (13 goals, 12 assists) in 39 games. His 13 goals and seven power-play goals tied for first on the team. Additionally, he won 58.2% of his face-off’s, which placed him 6th in the ECAC and 19th in the NCAA.

In 2015-16 as a junior, Clifton finished third on the team in scoring with 43 points (19 goals, 24 assists) in 39 games, including 10 power-play goals. His 43 points placed him T-26th in the nation in NCAA scoring (4th in ECAC), one point behind Sharks prospect Danny O’Regan with Boston University. Clifton was named to the ECAC Second Team, honored as with Quinnipiac’s Men’s Ice Hockey Seventh Man of the Year and was a member of the ECAC All-Academic Team (also named in 2014 and 2015). In addition, Quinnipiac made their first trip to the NCAA National Championship, where Clifton became the school’s first player to score a goal in the championship game.

Clifton had more than 20 NHL offers to turn professional following his junior season but elected to remain at Quinnipiac, where he played with his younger brother, Connor, a 2013 draft selection by the Arizona Coyotes.

In four collegiate seasons at with Quinnipiac, Clifton scored 95 points (44 goals, 51 assists) in 155 NCAA games. He received a degree in mechanical engineering.

Prior to his college career, the six-foot-one, 195-pound native of Matawan, NJ, played with New Jersey Hitmen of the Eastern Junior Hockey League.