Can we ward off the spread of the Zika virus

Roddy Scheer & Doug Moss / EarthTalk Zika virus, first discovered in Uganda’s Zika Forest in 1947, is transmitted to humans and other mammals through the bite of an infected... 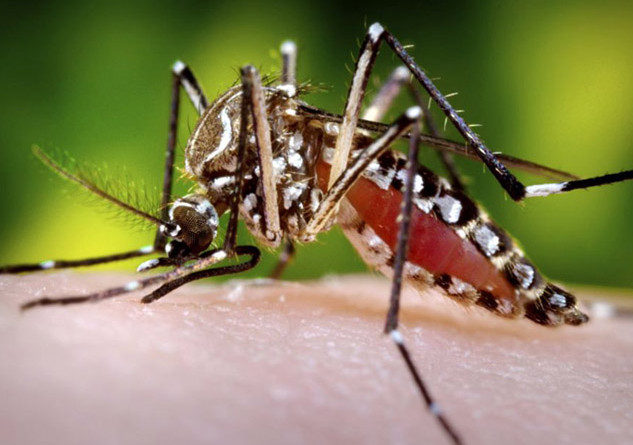 The Aedes aegypti mosquito can infect humans with the Zika virus when it takes a blood meal. Credit: Sanofi Pasteur, FlickrCC.
by ElObservador 05/26/2016

Zika virus, first discovered in Uganda’s Zika Forest in 1947, is transmitted to humans and other mammals through the bite of an infected Aedes species mosquito, and typically causes only a mild and short-term illness (fever, rash, joint pain, conjunctivitis) that likely immunizes the victim from future infections. But a Zika virus infection during pregnancy can cause a serious birth defect called microcephaly—where the fetal head doesn’t develop to the proper size, leading to other severe fetal brain defects.

Over the last half century, occasional Zika outbreaks have been reported in tropical Africa, Southeast Asia and the Pacific Islands. But the first confirmed case in the western hemisphere last year in Brazil now has public health experts concerned about its potential to develop into a global pandemic. “Because the Aedes species mosquitoes that spread Zika virus are found throughout the world,” reports the U.S. Centers for Disease Control & Prevention (CDC), “it is likely that outbreaks will spread to new countries.”

Indeed Zika’s recent “success” in spreading far beyond a few isolated pockets of the tropics may be partly attributable to how we have taken care of the environment in the modern industrial era post-World War II. Durland Fish, a professor of microbial diseases, forestry and environmental studies at Yale University, isn’t surprised Zika has spread widely, given the proclivity of the Aedes mosquito (which is also responsible for spreading dengue fever and chikungunya virus) for inhabiting artificially human-made habitats like tires, cans, plastic containers and rain barrels.

“It doesn’t live in the ground, or in swamps, or any other kinds of places where you would normally find mosquitoes,” reports Fish in a recent Washington Post article. “So humans have created an environment for it to proliferate, by having all of these water containing containers around, and the mosquito has adapted so well…it’s really kind of a human parasite. It’s like the cockroach of the mosquito world.”

And the mismanagement of urban waste is far from the only environmental factor in the spread of Zika. Environmentalists point out that dam-building and deforestation are also significant contributors to increased amounts of standing water where Aedes mosquitos can breed and come into contact with growing human populations. Restoring natural hydrological flows and leaving forests intact would be good defense mechanisms against the spread of mosquito-borne disease of all kinds.

But whether we can contain the warming of the planet as a result of human greenhouse gas emissions might be the single biggest factor in whether we can prevent Zika from morphing into a global public health menace. The World Health Organization (WHO) recently reported that predicted global average temperature increases of two to three degrees Centigrade would make temperate latitudes hotter, in turn exposing several hundred million more people to Aedes species mosquitoes. Malaria, dengue fever and other mosquito-borne diseases would also surge along with Zika.

“You have to do something about the mosquitoes, and that’s strictly an environmental problem, there’s no medical applications to that,” concludes Fish. “And focusing on that as an environmental issue is going to have the greatest impact on protecting people.”