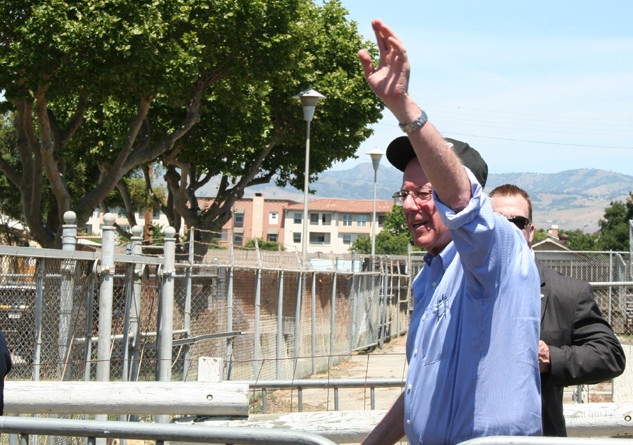 Bernie Sanders at the rally on Wednesday May 18, 2016 which took place at Santa Clara County Fairgrounds. Photo Credit: Eduardo Hilario
by ElObservador 05/26/2016

If you’re an avid follower of the news, you’ll have heard a lot about Bernie Sanders and his supporters. Some have dubbed them “Bernie Bros” in order to slander or discredit the massive amounts of support that he’s received within the last nine months, going from someone that most people didn’t know about to one of the most likable candidates of  this year’s presidential election.

Last week there was a rally held at Santa Clara County Fairgrounds in San Jose where he came to speak to all his supporters in this region of California. I went to check it out myself and the atmosphere is not what the media would have you believe. The vibe I got was incredibly friendly and extremely diverse. There were a few composers playing guitars and singing. A plethora of people wearing Bernie Sanders t-shirts. A lot of people are wondering why the young adults of the United States are throwing their support to Bernie Sanders in huge numbers.

One of the reasons for this is that, to quote Cenk Uygur, host of the internet new station, The Young Turks, “He’s real.” What he means by that is that what you see from Bernie Sanders is what you get. He seems to be very transparent about his beliefs and very verbal about the corruption in our government, where major corporations can invest money in politics so that they can pass laws and policies that favor their profits. Another point we hear about a lot in Bernie’s rallies, and one brought up at the rally in San Jose is his reforms to the health care system by having the government provide health care, unlike now with all the private companies providing health care at a cost. Bernie Sanders finds it mind boggling that the United States is one of the few countries in the world that doesn’t have universal health care and that people don’t have health care as a born right like other countries.

Another one, and this is a huge point, is that tuition fees for colleges and universities is incredibly making it harder for the lower and middle classes to afford to be able to go to any good schools to further their education and ultimatley to get a high paying job. On the other hand we spend more on the defense budget than the top 25 countries in the world combined. The amount of student debt in this country is a huge issue to Bernie Sanders. He believes that our college and university students shouldn’t graduate with nearly one hundred thousand dollars in student debts that they need to pay over the course of decades.

So, the San Jose rally was a very positive and inspiring experience. When Bernie Sanders came on stage, the people at the rally exploded in a roar of excitement. The excitement of the crowd is intoxicating. I found myself cheering Bernie Sanders on when he walked on stage and when he brought up his thoughts on fair pay for women in the workplace and more money in the education system and higher taxes on the wealthy one percent of the US. A lot of people are trying to undermine his political revolution by smearing his name and slandering his supporters. On June 7th, it’s California’s turn to vote for who they want to represent them in the primary election. That is the time to prove those people that you are here and the revolution is happening and why Bernie Sanders is “A future to believe in”.

PG&E Ayuda a Inspirar a Latinas

Can we ward off the spread of the Zika virus