Warriors Drop One in Denver 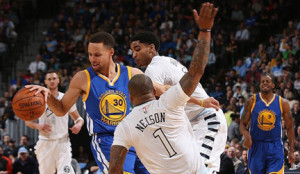 DENVER, CO-The Warriors suffered their first loss of 2016, falling to the Nuggets 111-110 in Denver on Wednesday night. Stephen Curry led all players with 38 points and nine assists, and Harrison Barnes scored his most point since returning from injury, but it wasn’t enough to overcome a Nuggets team that led for the vast majority of the contest. With the defeat, the Warriors drop to 36-3 on the season.

The Warriors got off to a slow start, going without a field goal until Klay Thompson sank a jumpshot with 8:47 left in the first frame, before which Golden State had trailed 6-0. Stephen Curry made a three-pointer 24 seconds later, and once the Splash Brothers got the faucet turned on, the Nuggets couldn’t turn it off, at least, momentarily. Curry would assist on four of the Warriors’ next five baskets, three of which were scored by Thompson, including a three-pointer, to carry the scoring burden for Golden State through the first seven minutes of the opening quarter. Unfortunately for the Warriors, however, Denver had no trouble scoring either. The Nuggets followed that Splash Brothers burst with a 9-0 run, taking a 27-17 lead with 2:09 remaining. The Warriors would respond with a 7-0 surge over the next minute, but Denver would outscore Golden State 5-1 through the remainder of the quarter, taking a 32-25 lead into the second frame.

Harrison Barnes hit back-to-back three-pointers, tying the game at 46 with 2:22 left in the half. Curry would score the next six points for Golden State, including a three-pointer to give the Dubs their first lead of the game at 52-51 with 1:24 left to play. Denver would respond with consecutive baskets before Barnes scored the final two of his 14 points in the quarter with 12.5 seconds left to send the game into halftime with the Nuggets clinging to a 55-54 advantage.

After Jameer Nelson’s three-pointer gave the Nuggets a four point lead just over two minutes into the second half, the Warriors outscored Denver 10-0 over the next three minutes to take a 66-60 lead with 7:04 remaining in the third quarter. But, Denver would not be discouraged. Both Will Barton and Danilo Galinari would make each of their two free throw attempts in the final 40 seconds, sending the game into the fourth quarter with Denver up 83-73.

The two sides would alternate 6-0 runs, leaving the Warriors with the same 10-point deficit four minutes into the final quarter. Darrell Arthur would score the next five points for Denver to give them their largest lead of the game at 94-83 with 6:56 left to play. From there, Curry would put the Warriors on his shoulders and attempt to make a late comeback. The reigning MVP would score 20 of Golden State’s next 24 points, pulling the Dubs within 109-107 with 37.1 seconds left to play. The Warriors would then force a turnover, giving them a chance to take the lead, but the Nuggets got a steal and Gary Harris was fouled on the ensuing possession, sending him to the line for two free throws with 5.4 seconds left. Harris made both, after which the Warriors immediately called timeout. Klay Thompson sank a three-pointer directly off the inbound pass, pulling Golden State within 111-110 with 3.4 seconds left on the clock. After Galinari split two free throw attempts, the Warriors called timeout, trailing 112-110 with 3.1 seconds remaining. Golden State advanced the ball to half court and found Thompson again on the inbound, but his three-pointer fell short, ending their comeback bid. With the defeat, the Warriors drop to 36-3 on the season.