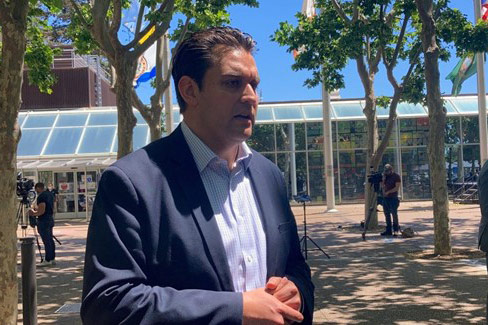 His shift ended around 8 a.m., an hour and a half after reports of the shooting.

“I was sending him text messages and giving him a phone call. I didn’t hear back from him,” Peralez told San José Spotlight. “We’ve seen these incidents happen all across the country, and when it happens close to home, you may actually know somebody with a friend, loved one or coworker (affected).”

Later that afternoon, Peralez discovered his friend, 40-year-old Michael Rudometkin, was among the nine fatal casualties.

“My dad and I were just planning another golf day reunion with Mikey, and now that will never happen again,” Peralez wrote in a recent Facebook post. “My family and I have lost a long time great friend and there are no words to describe the heartache we are feeling right now, especially for his family.”

As law enforcement and government officials reported updates on the still-unfolding situation Wednesday morning, family and friends of VTA workers were left waiting for hours on the status of their loved ones.

Peralez was among them.