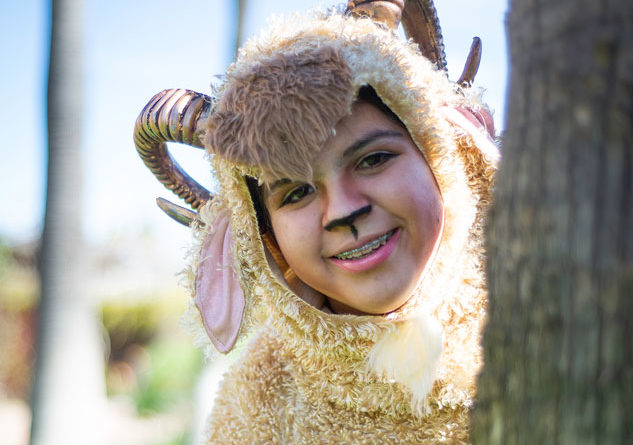 The Transition of Doodle Pequeño, by Gabriel Jason Dean, is the story of a young boy named Doodle. Doodle and his mother have just had to move to a new apartment because Doodle’s father was deported to Mexico. Doodle’s only friend is an imaginary talking goat named Valencia. On Halloween night, Doodle makes a new friend named Reno. Reno has problems with neighborhood bullies because he likes to wear dresses. Together, Doodle, Reno, Valencia, and even the bullies learn about the value of friendship, understanding, and the freedom to be who you really are.

Teatro Visión’s production features an amazing cast of local young people age 12 to 18, directed by Cristal González Avila. As part of the rehearsal process, this young cast is learning and talking about the important issues that the play raises like exploring gender identity, defying gender expectations, dealing with bullying, and enduring family separation.

Cast member Alessandra Ramirez, who plays the role of Marjoram, explains why people should come to see The Transition of Doodle Pequeño: “Doodle Pequeño is a show that not only gives a message to its audience about how LGBT community is part of people’s daily lives but also shows them how many kids have to live with the fear of deportation and being bullied for being different.”

Cast member Lourdes Alvarez-Helstrup, who plays the role of Toph, agrees: “The show opens up a conversation about LGBTQ identity that the Latinx community normally shuns. I think that it is important to put on a show that deals with these topics and brings up the conversation in a different way.”

Teatro Visión is partnering with local organizations that support LGBTQ+ youth to provide information and resources for audience members in the lobby at performances of The Transition of Doodle Pequeño. Groups that will be represented include LGBTQ Youth Space, Outlet, Gender Health Clinic, Silicon Valley De-Bug, and Community Solutions.

You can support Ramirez, Alvarez-Helstrup, and the rest of the incredible young cast in The Transition of Doodle Pequeño March 28-31 at the Mexican Heritage Plaza Theater. American Sign Language interpretation will be provided at the March 30 7:00pm performance. Tickets are $10 to $40, on sale now at doodle.brownpapertickets.com or 1-800-838-3006. For more information, visit www.teatrovision.org/doodle or call 408-294-6621.

I saw a news item about overhauling classic old cars with electric engines, and wondering if this can be done with any old car?