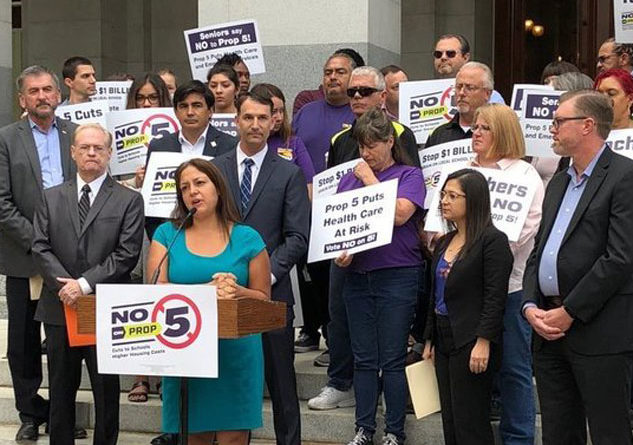 SACRAMENTO, Calif. – The No on Prop 5 coalition kicked off its campaign Wednesday to defeat the ballot measure that would change the way properties are taxed in California.

The coalition includes public sector unions that represent firefighters and teachers, plus groups that fight to protect health care, seniors and affordable housing.

Anthony Wright, executive director of Health Access California, argues that Prop 5 is a special interest tax break for the wealthy that would drain $1 billion a year from county budgets, forcing cuts in services.

“It would cut schools, it would cut firefighters, law enforcement and public safety, libraries and parks, as well as health and human services that we all depend on,” he points out.

Right now seniors, the disabled and people affected by wildfire can take their tax rate with them if they buy a home that is equivalent or smaller.

Proposition 5 would allow those people to buy a much bigger home, and keep their tax rate or something close to it.

The California Association of Realtors and the real estate industry have raised more than $13 million to promote Prop 5.

Wright says Prop 5 would mainly benefit older, wealthier homeowners and shortchange everyone else.

“It will encourage more sales of high end houses, but that won’t do anything but exacerbate our current housing situation and force cuts to key local services,” he stresses.

Prop 5 does not affect current benefits that stemmed from Prop 13, which was passed in the 1970s. The vote takes place on Tuesday, Nov. 6.