Hot Springs, Pierogis and Everything In Between 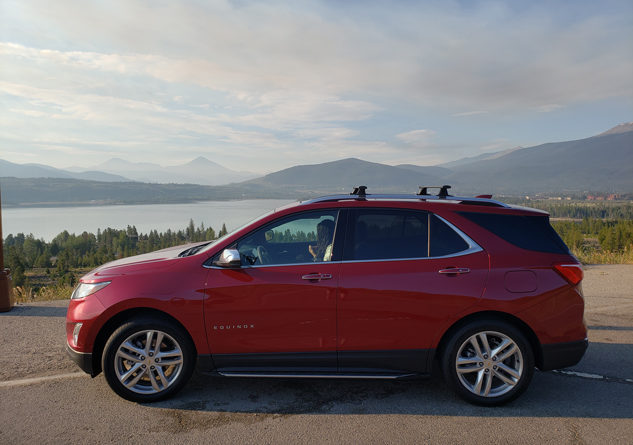 The 2019 Chevrolet Equinox is great fun and a useful tool to use in the Colorado Rockies. Photo Credit: Yvette Licea
by ElObservador 08/03/2018

My parents had just had my older brother and were on the market to buy a truck—one that could get them around but also help my father with his side job of property maintenance. An elderly couple who was selling a silver and black 1980 Chevy Cheyenne instantly fell in love with my parents and their baby boy, promising my parents the truck and giving them time to allow them to gather up a bit more money, even refusing other sellers. Although my parents both owned an Impala and a Malibu back in their “single days”, this was the first automobile that they bought as a family.

This truck is fondly remembered as the “Raider Truck”, in honor of the Oakland Raiders’ color scheme. It took us on many trips around California, it allowed my father to teach his son about hard work and respect, and it allowed my sister and I to create countless imaginary adventures in the truck bed with our Barbie dolls. This truck was awesome.

With the opportunity to test the new 2019 Chevy Equinox on a drive through the Rocky Mountains in Colorado to the beautiful town of Glenwood Springs, I knew that this could not and would not be an opportunity to pass. I called my best friend of 22 years to join me on a #girlstrip and we were off!

Upon our arrival to Denver, we were briefed on the features of the car. I could easily open the trunk with a double click on the remote to place our luggage in the spacious trunk and close it with a simple touch of button on the trunk door. Had we stayed longer than the two days planned, I could have easily pulled on the latches on the side of the compact SUV to kneel the seats flat, creating a flat loading space of 63.6 cubic feet. This would have been large enough to move me out of my college apartment.

I then just placed the remote in the middle console (which has been redesigned to create storage space in between and all power controls placed back on the doors) and started the car with the touch of button. No keys! For a person like myself, who always seems to mix up the keys, get stuck with too many items in my hand, and drop everything while trying to multitask- this made everything seamless!

The touch screen in the front of the dashboard is simple to use. The new software also allows for more seamless connections with both iPhones and Androids (my best friend has an iPhone and I an Android), turning your dash into apps that are more familiar to what you see on the screen of your cellular device. We inputted the first stop, The Hangar, located in the Stanley Marketplace about 20 minutes away from the airport. The car came equipped with a SiriusXM radio, but we opted for using the Bluetooth features to stream some of our own music with Pandora, utilizing the Wi-Fi feature to save us some cellular data.

After spending some time in the Stanley Marketplace, which is filled with breweries, eats, treats and some shopping, we began our three-hour journey to Glenwood Springs, located in the Rocky Mountains at an elevation of 5,761 feet. The 1.5L turbo engine is seamless, giving power without giving one a jolt. In combination with the fact that this version of the Equinox is 400 pounds lighter than its predecessor, I did not have to worry about my friend spilling her water while I ascended through the mountains. Chevy has also implemented some great safety features including: Side Blind Zone Alert to warn drivers of vehicles in blind spots, Lane Keep Assist to keep you from drifting, and Forward Collision Alert to make the car auto stop for the close calls during sudden traffic stops. The alerts are also coordinated with a Safety Alert Seat, which vibrates to catch your attention. Not only was the drive comfortable, it also made us feel safe and secure, so we could appreciate the natural beauty of the drive through the Rockies.

For those who doubt navigation programs that come with vehicles and prefer to use apps such as Google Maps or Waze (like me), I will say that the Chevy Equinox put me in my place. Like California, Colorado has been suffering from wildfires that have been threatening homes and national forests in addition to closing down roadways. On our drive, the navigation system kept telling us to turn around but because Waze did not mention this, we decided to ignore the directions from the car. Turns out, another wildfire had broken out closing down the freeway for a section, which our cell phone apps did not update but the Equinox had. I was impressed with how fast the update of our route was on the car and decided that next time, I’ll listen to the SUV.

We arrived to Glenwood Springs, checked in our hotel and got ready for dinner at The Pullman, an American eatery wherein the Pierogis were the highlight for my friend and I. Beforehand we needed to parallel park our vehicle in a tight space, but this was no challenge. In addition to the rear facing and front facing cameras, the Equinox is also equipped with an aerial view of the car to show exactly what position I was in while parking so the embarrassment of pulling in and out repeatedly was avoided with the help of these features.

Filled with excitement from the Equinox’s great parking skills, we walked out of the car, but upon closing the side door, the SUV reminded me with two quick beeps that the remote was left inside. I will admit this happened repeatedly throughout the trip, so for those who always forget your keys in the car, Chevy has your back!

The next day, we decided to explore along the Colorado River, renting bikes and following the Canyon Trail (which leads through the Glenwood Canyon along the Colorado River) and River Trail (which stays close to the Colorado River and Roaring Fork River). The weather was well into the 90s, so upon our return the Equinox, we were grateful for the cooling seat feature and fast working air conditioning system. We later ventured to Casey Brewing and Blending, where we tasted beers that had been aged in oak barrels, and ended the trip spending some time relaxing at Iron Mountain Hot Springs, soaking in the naturally heated pools while taking in the surrounding scenery.

Chevy has yet again, created another everlasting memory and in our case, #girlstrip was a success. Its comfort and strength make it easier to enjoy the scenery and quality time with loved ones. It is well made vehicles like this and our “Raider Truck” that continue to make my family a “Chevy familia” – and I cannot wait to see what more Chevy brings in the future.

The base price of the 2019 Equinox is $24,525. More information can be found at the following link: Chevy Equinox

What are some ways that companies can encourage or incentivize their employees to live greener and promote sustainability?