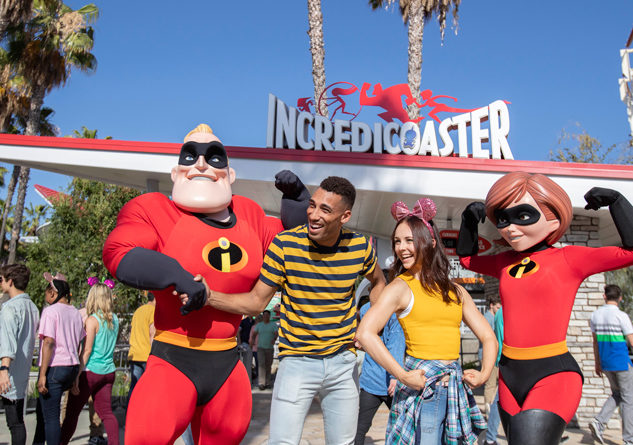 If you haven’t been to Disneyland resort in a while, there’s quite a few changes happening. From the upcoming 2019 opening of the hotly anticipated Star Wars: Galaxy’s Edge to the updates to Disney’s California Adventure, as well as new updates to old rides and the technology of Disney’s food ordering, there is opportunity to get on revamped rides, and experience the new world inside Anaheim’s Disneyland Resort.

The newest entry, a year before Star Wars’ world opens, can be found across from Mickey’s HQ.

I’m talking about Pixar Pier, the rethemed, Pixar Animation Studios centric boardwalk that has replaced what was Paradise Pier. Since the opening of Disneyland California Adventure (DCA), in 2001 Paradise Pier was a staple of the California themed land across from the Disneyland theme park. While it’s less California now and more of a place to access the wide range of intellectual properties belonging to Disney, there still sits a sense of the state and allure of California in some of the rides and the architecture.

With Paradise Pier, the world of Victorian era boardwalks and amusement parks along the California coasts in the 1800’s is remade around a man-made lagoon. Complete with carnival style games and food items, the section of DCA was popular through the years, while other portions of the park were redesigned or outright removed, like the large “California” letters decorating the front of the entrance to the park.

Up until it’s reskinning with Pixar, rides included the large gondola ferris wheel called Mickey’s Fun Wheel as well as the highly kinetic roller coaster called California Screamin’. Now though, as we look at the attractions through the lens of the Pixar universe, we get the Pixar Pal-A-Round as the new look for the Mickey’s Fun Wheel, and the highest anticipated ride from this new world, the Incredicoaster, the new version of the DCA rollercoaster.

If you’ve had a chance to get on either of these rides before, there won’t be anything too far astray from the original experiences, except some added Pixar characters adorning the gondolas on the Fun Wheel. The large Mickey Mouse face that was a great photo op of the pier is still there, keeping the fun atmosphere people have come to expect at DCA intact.

The Incredicoaster does change up the original ride by adding new features related to Pixar’s “The Incredibles”. The route of the rollercoaster remains unchanged but these newly added narrative features to the ride and tunnels which harbor some great effects and lighting make the coaster closer to a Disneyland “dark ride” experience. Riding it several times during the media event had my adrenaline going for a whirl, but also kept me entertained because of the newly recorded audio narration, which is best left to the rider to experience. All in all, a nice upgrade to an already exciting roller coaster. While California Screamin’ was a sleek, no frills roller coaster on a boardwalk, the Incredicoaster gives you that plus more.

Among the rides, there is retheming of merchandise booths, food stands, as well as the pier’s gallery, which was a walk along the boardwalk with advertisements and billboards. Now they include beach themed announcements and messaging featuring characters from Pixar’s “Wall-E”, and their newest IP, “Coco”. These are additional picture-perfect moments to capture at the Pier.

New Pixar themed food and merchandise options are also to be had, with Ariel’s Grotto restaurant being turned into The Lamplight Lounge. (For the Spanish speakers, there is a lot more info on the Lounge on page 17). The Lamplight in particular has a gastropub feel to it, with great Pixar theming and enough food and drink options to satisfy adults as well as children. Try the freshly made donuts if visiting.

Exclusive Disney/Pixar merchandise is available for a limited time too, including some items that I foresee as new staples in the Disney parks Mickey ears and clothing. If you’re a Pixar fan, it’s a treasure trove of merchandise in one place, second only to the actual Pixar Animation Studio Store in Emeryville.

One of the final interesting notes about Pixar Pier is that it’s not done with its reconstruction. There are still two more rides to be opened, “Toy Story” themed Jessie’s Critter Carousel and “Inside Out” themed Emotional Whirlwind. These will open in 2019, I imagine on the heels of Star Wars: Galaxy’s Edge. As a fan of Disneyland, it’s a great time to visit, and an ever-changing place that makes for revisiting old classics and trying out new ones.

As you exit the pier at nighttime you are greeted with a sign only meant for those walking out (or looking back as they walk in). Taken from the movie “Up”, it reads: “ADVENTURE IS OUT THERE!”