District 7: A Fight for the Community 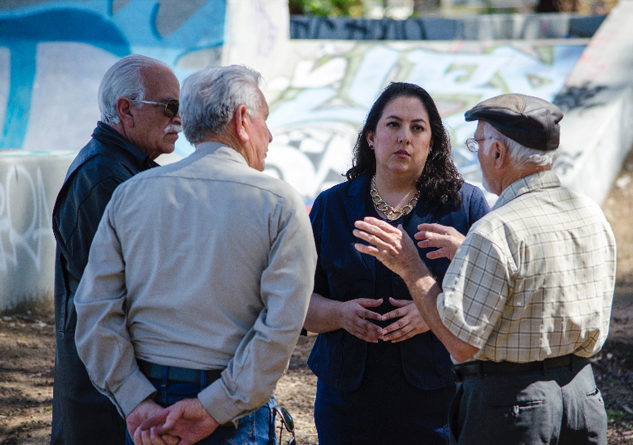 If you were to ask Maya Esparza what prompted her to run for San Jose’s District 7 council seat in the upcoming June 5th elections, it comes down to one moment: a flood.

The massive flooding and damage caused to hundreds of households during the spring of 2017, where most of said damage centralized along the Coyote Creek and the Rocksprings neighborhood in District 7, spurred Esparza into doing what she says she’s been doing as long as she can remember.

“Most of the devastation was in District 7. And so, I was out there in the community centers helping to coordinate the response, working with the city, with the red cross, working with the Franklin McKinley School District because the teachers at Shirakawa School were very active and responded very quickly.”

The response from the city, (which later officially concluded they could’ve done better in their outreach), was what cemented Esparza’s push to run for council.

“The city did a terrible job of responding to the flood, they evacuated the animals at Happy Hollow before they thought about evacuating people. By the end of the first day, the teachers at Shirakawa had identified hundreds of families, started a GoFundMe campaign, and started a drive for food, clothing and personal items, things that the city didn’t get to for much, much later,” she says.

Esparza pulls no punches in who she sees was responsible for the lack of immediate support in the Rocksprings neighborhood. “I was really disappointed with the city’s response and Tam Nguyen’s response.”

Her view of District 7 is a place that needs to be focused on, both the community and its infrastructure. The flood was just a confirmation that she should pursue that focus herself. “I think the flood response of the lack of it really represented how District 7 and the community has been neglected in a lot of ways so if anything, a disaster is urgent, it’s a crisis, it’s a time to bring people together, it’s all of those things. But for me it was the last straw. It showed me that things weren’t happening that needed to happen in the community here.”

Esparza has a resume that has seen her work with school districts, homeless residents, and directly with the city of San Jose. She says her parents and grandparents are the basis for her activist values and assisting nature.

A Basis for Activism

Growing up Esparza’s parents were very much involved in community politics, which is what she says shaped her worldview.

“I learned from a very very young age what it was like to not have a voice. My mom’s father was a World War 1 veteran who had had his citizenship stripped because he was working to organize workers in the citrus fields in Southern California, and my parents grew up really wanting to make a change.”

Esparza says her parents picketed with Cesar Chavez and were involved with community-policing in a time when San Jose was a very different place in terms of police relations.

“In San Jose we didn’t have District elections, so a lot of people don’t realize that folks fought for that because they wanted the community to choose who represents them instead of having decisions made for them by a few people where the power was located in another part of the city. My parents were part of some groups that used to follow the police and document everything and take pictures of it.”

Some of the key issues that Esparza wants to focus on should she win are housing, homelessness and transportation.

“The bay area has created 367,000 jobs but only added 57,000 new homes, so obviously there’s’ a huge imbalance in terms of housing. Housing costs have gone up, we have in District 7 a lot of families living together, families that used to be able to afford their own apartment but now are renting out rooms in a house so now you have different families sharing a house and barely being able to make it.”

The income inequality and the housing crisis go hand in hand and Esparza has ideas for how to tackle areas within this complex issue.

“I think the housing crisis is the number 1 issue and for me it’s really a variety of issues, rent control is obviously a part of it, addressing it, but we also need to build more housing, for different income levels. We need housing for first time homebuyers in order to buy a home. All of those things we need, and I think District 7 has a great opportunity to build, especially outside of the downtown corridor. Because we’ve been neglected for so long, we have a great opportunity for adding more infrastructure, simply because we haven’t had it.”

In 2014 one of the largest encampments in the United States, “The Jungle”, was closed by the city following threats of a lawsuit from the state of California. Esparza says that as much as it was meant to help the city, the post clean up didn’t rectify the causes of the problem.

Esparza says that her ideas include increasing citywide services to homelessness, not just in District 7. By converting motels into housing, staffing more homeless outreach and providing a 24-hour hotline, things could get better for these residents.

“We have in our city more than 4,000 homeless individuals and we know what ends homelessness, and that’s housing. There’s something called the ‘housing first model’, which has been studied and proven effective to work. It means you have someone and then you stabilize them, their health, and then train them for jobs and other things to be healthy and successful in life. But it’s hard to ask someone to look for a job or a second job if they’re living in the street and are just trying to thrive.”

In terms of transportation, Esparza would like to increase rapid transit within District 7, specifically within the Tully Road and Monterey Road areas.

Esparza ran for a council seat 4 years ago and after her loss then she went back to work within the nonprofit sector, specifically working on the homeless issue. Since then she has changed her method to running for council.

“I’ve learned a lot of lessons about running a campaign and one of the things that I benefited from was last time especially in the primary a lot of organizations sat it out. They didn’t get very involved in the campaign. This time around I think I’ve been able to reach out and more people have stepped in to help which has been really great.”

This time around, Esparza wants the people of District 7 and San Jose know that the power lies in community and the individual’s will to work alongside neighbors to make a better situation possible.

“I think people need to see that they can make a difference. And when people get shut out or ignored they feel like they lose hope. So, it’s one thing to for people to be fed up, and people are very fed up, but it’s another to say, ‘I’m not just fed up, but I want more. We can do this, we can have all these things, we can come together as a community.’ I think that’s very powerful, or else I wouldn’t be here. I’m a believer in the power of people coming together. I’ve seen what a difference people can make when they do, it’s a positive difference.”

And why should people check Maya’s name June 5th for District 7?

“I have a track record. I’ve been working in the community for over 20 years, getting things done. I’ve created programs, I’ve founded nonprofits. I’ve worked in government, and I understand how it works and what it takes to get things done. I’m from the community and I’m not afraid to ever roll up my sleeves and get things done because I think it’s going to take a lot of hard work, but we can do it.”

How Do You See the Future?