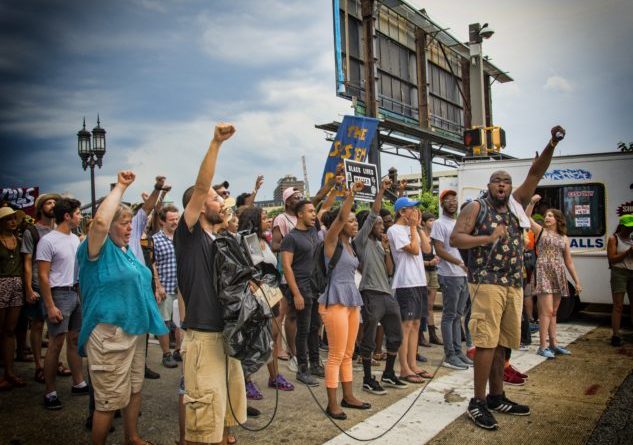 Another African American youth, Stephan Clark, age 22, was killed on March 18, 2018 in his grandmother’s back yard by two Sacramento, CA police officers. Twenty rounds were fired; the family authorized its own independent autopsy which established that 8 rounds fired struck Stephan’s back. The two officers both reported that ‘they feared for their lives; were in harm’s way’ and fired 20 rounds at a Black youth who was ‘charging them’.

Since the Michael Brown incident, August 9, 2014, in Ferguson, a suburb of St. Louis, Missouri similar incidents have happened. With the possession of smart IT devices which have photo, video and audio capability civilians have recorded what happened, on occasion, as it happened.

These civilian photographed/video records of similar incidents were compared to the official incident reports submitted by the officers who wore body cameras and were involved in these use of force incidents…when compared, the reports submitted, and the videos/photos/eyewitness reported, did not jibe. Controversy resulted in “BLACK LIVES MATTER” efforts to bring JUSTICE to these incidents.

These are the incidents to which the community has reacted with demonstrations and demands for justice. The Police Internal Audit investigation is conducted by police staff; takes too long time; rarely is any officer tried in a public court. A sage once stated that ‘Justice delayed is justice denied’.

There have been many statements by Police Chiefs, local leaders, state and national leaders, and elected officials. In the case of Stephan Clark, the Trump Administration stated that ‘It is a local incident issue’.

However, Reverend Al Sharpton, NYC activist leader, retorted, “This Stephan Clark incident was related to other similar police use of violence (firing their side arms) which ended up with too many dead Black youths nationwide. It is a national issue,” which has overtones of racism, white supremacy, bias, bigotry, and may have an ‘unconscious pre-disposition’ to act in haste followed by being apologetic and sorry later after a youth’s life has been terminated.

What does a community such as San Jose, CA and its police department need to do to ensure these officer-involved shooting incidents are properly assessed? What follows is what San Jose, CA accomplished which enabled it to become ‘the safest city’ despite having its police department staffing reduced from 1,500 sworn officers down to 750+ due to budget and pension plan renegotiation issues which have recently been resolved.

Twenty-two years ago, in November, 1996, citizens of San Jose voted to place the Office of the Independent Police Auditor into its City Charter. While different models of civilian oversight (and monitoring) agencies had emerged with varying success since the 1920’s, San Jose was the first auditor (& monitor) model in USA.

(Its) new city charter provision made the IPA a permanent branch of city government. (This change to the City Charter also directed the (Mayor and its 10) City Council to appoint an IPA to serve a four-year term and established that the midterm removal of an IPA requires a vote of approval of at least ten (10) of the eleven (11) members of San Jose’s City Council. (San Jose City Charter, Section 809). This added City Charter item established a stable audit and monitor function.

Since 1996, (San Jose’s) IPA has been auditing and monitoring SJPD activities with the result that many significant changes in police operations have been made with prior SJPD’s informed cooperative involvement and agreement.

This ‘Auditor-Monitor Model’ has been adopted by seven other jurisdictions. Each has evaluated its own culture and circumstances to determine how best to structure oversight and monitoring that is effective while creating TRUST between community being served and its police.

One significant development was the development of an effective COMPLAINT PROCESS which yielded useful data. Over time, it was observed that of each 100 sworn officers about 3 to 5 generated 85% of complaints submitted. These officers were counseled, re-oriented, and re-trained; certain ones who did not respond to these efforts were released from the police force.

CITIZENS MUST UNDERSTAND THAT THEIR COMPLAINTS ARE MEANINGFUL AND PERMIT POLICE ADMINISTRATORS TO IDENTIFY WHO NEEDS ASSISTANCE AND WHO WILL NEVER BE ‘A GOOD COP’.

Reviews of complaints by both IPA and the SJPD’s Internal Auditor (IA) have resulted in several policy changes. Are you aware that the entire Police Procedure Manual is posted online now? Are you aware that each officer who has an encounter with a civilian in San Jose must record the reason for the actions taken. This has almost eliminated the ‘curb sittings’ which often happened in the past.

More improvements could be adopted and implemented. All complaints about police behavior need to be aggregated to create one data base whose analysis would be useful to ‘police management’. Many of those complaints sent directly to the Police Department do not get over to the IPA’s office…with the result that the data base is lacking those never reviewed by the IPA.

There is one major improvement that needs to be made. That change is within the jurisdiction of those who deal with justice. Presently, all an officer has to say is ‘I felt my life was in danger’ (or someone was in harm’s way) which results in no charges at all being made even if the witness or video evidence indicate that ‘probable cause’ existed or an inappropriate factor was applied.

The data available is incomplete because of the lack of ‘uniform review and reporting standards’. Tradition is that a sworn officer is rarely, if ever, indicted for inappropriate actions taken which resulted in the termination of someone’s life. The best way to resolve this imperfection is to ensure that all officer involved shootings are reviewed by an audit group which has no conflict of interest. Currently all IA audits contain officers who are peers and ‘buddies’ to those officers whose actions are being assessed.

As a citizen, I have served on IPA’s Citizen’s Advisory Committee since 2005. As a civilian, I have had extensive prior exposure to death and dying as a collateral experience of being a health care professional (plus being a military surgical technician specialist for 30 months). I have an abiding interest in improving the delivery of justice especially to the marginalized individuals who tend to be low income and persons of color who disproportionately end up in prisons or jails.

Lady Justice, the icon, is blindfolded to signify that justice is blind; Justice should be objective and impartial; and justice must reflect core values and ideals. Justice delayed is justice denied; Justice must be delivered in a timely manner even though it takes time to accomplish full discovery of evidence whose truthful and factual weight ensures impartiality which balance the Scales of Justice. These days Lady Justice is being thwarted by the fears of those who have the power and influence needed to

obstruct achievement of ideal justice. All that is required is ‘one sympathetic and compassionate step for humanity’ on behalf of humankind. That step is to have every officer-involved shooting reviewed, assessed, and evaluated by inclusion of an independent auditor who has no conflict of interest.

The family members of a decedent and the community merit the delivery of justice through means that are fair, impartial, and not tainted with corruption, prejudice or favoritism. Justice takes a lot of work, commitment and perseverance…and “We, The People” demand it for all of us.