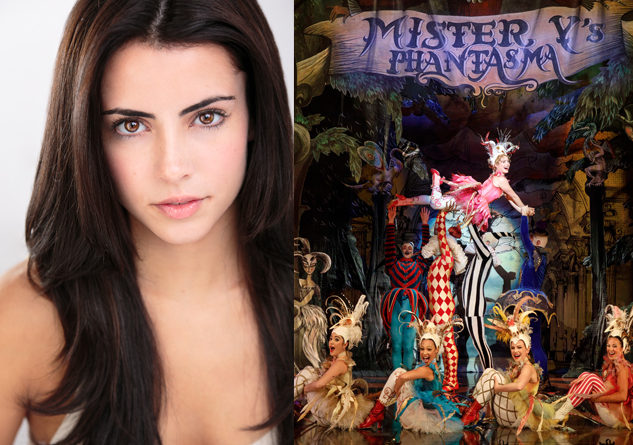 We hear from Yesy Garcia, who is part of the sequel to “The Phantom of the Opera” Production

Yesy Garcia is part of the cast of the upcoming US Broadway touring production of “Love Never Dies”, the sequel to the iconic “The Phantom of the Opera”. The tour will make a stop in San Jose from March 13-18 at the San Jose Center for the Performing Arts.

Garcia got her start as a child dancer on a popular Latino variety show and continued to follow her love of dancing and the arts into adulthood.

In “Love Never Dies”, she wears multiple hats (and costumes) as a part of the ensemble, as well as understudying the character of Fleck.

In the following Q&A get to know Garcia and her thoughts on working on this compelling sequel to a story of a masked man in love with a chorus girl named Christine Daaé, and all that comes from the drama and emotion of it all.

Hello Yesy. To start off, could you share a bit about how you ended up becoming a Broadway performer?

My parents are from Cuba and I originally started performing in the show “Sabado Gigante”. I was in a kid’s segment with Don Francisco and I was like 4 years old. I grew up doing that and stopped for a little while in high school, but I always kept dancing and involved with the arts.

Is this your first Broadway show?

This is my first big Broadway tour, yes. Right out of school I worked on a cruise ship, I did “Mamma Mia!”, and then I did “In The Heights” in Houston for a little bit. It landed me in “Love Never Dies”, which is incredible to be a part of. It’s the first time it’s touring America so it’s kind of a big deal and I’m very honored to be a part of it.

I was curious what you thought about Frank Lloyd Webber’s comments on whether “Love Never Dies” is or isn’t a sequel. What are your thoughts on that?

The show is continuing the story and it has the same characters as the “Phantom of the Opera”, there’s Meg, Madame Giry, Raoul, the Phantom and of course Christine. But I mean the show stands alone, you don’t need to watch the first one to know what’s going on in our show. It’s a huge spectacle. Some people say that is surpasses “Phantom of the Opera” aesthetically because of the set, costumes and lights. It’s an incredible experience to watch.

What is happening in the story within “Love Never Dies”?

It’s continuing the love that Phantom has for Christine. It takes place ten years after “Phantom of the Opera” and it shifts to where the Phantom is at and how his eternal love for Christine is still there, and that will never go away. Meg has now left with Phantom to Coney Island where the show takes place to start this new show, Phantasma, Meg is the leading star in his show. Christine comes over and the whole drama starts, I don’t want to give too much away but that’s the gist of it, the undying love for Christine.

Could you describe your role(s) within this production?

I’m part of the ensemble and I understudy one of the roles, Fleck, but as an ensemble member it means I get to do a lot of different characters in the show. I start off as an aerialist and then the next scene I’m a showgirl, then I’ll be a wealthy passenger or creatures in the Phantom’s lair. The first 20 minutes of the show are crazy backstage with all these quick changes. In under a minute, I have to change and be someone else in the next scene. It’s a lot of different characters that I get to play with throughout the show, it’s great and very fun.

Is there any aspect of the production that is your favorite, whether on or off stage?

My favorite part of the show, it doesn’t really have to do with the show itself but at the end of the show, the ending, I definitely can’t give away the ending but it is so special that there’s always a pause from the audience after the show and it’s just this moment of silence and then all of a sudden everyone starts clapping and going crazy and it’s a beautiful thing that they are just still so immersed and involved with the show. When I’ve seen the show, I feel like I’m a part of it, and I think that’s what the audience feels as well. At the end of it they’re like, “Oh my god, it’s over?”, and that’s a beautiful moment for me, waiting in the wings to go and bow.

Lastly, why should audiences come and check out “Love Never Dies” when it comes to San Jose?

Like I said before, the show stands on its own, you can just show up and you’re definitely going to go for a ride. It’s a rollercoaster, you will laugh, you will cry, you will experience emotions like the characters. It’s a very special show and visually, the costumes and the set, is just stunning. Sometimes you’re just watching and wondering how is that even happening, how is it even possible [because] there’s so much going on. They will not leave disappointed.

“Love Never Dies” will be at the San Jose Center for the Performing Arts during March 13 – 18, 2018. Tickets are available at ticketmaster.com and broadwaysanjose.com.

How to Teach Kids to be Savvy Consumers