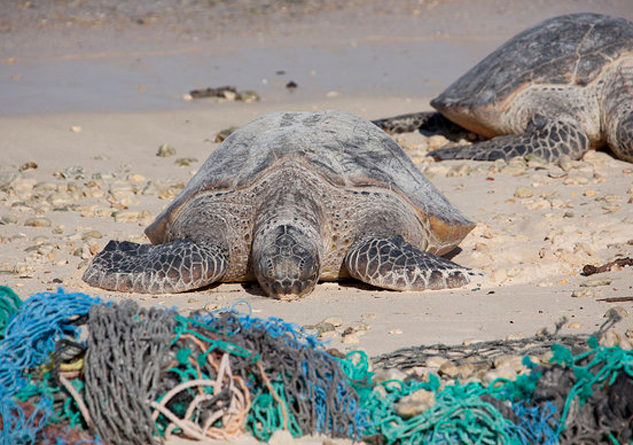 A new report highlights the threats fishing nets pose to sea turtles, which will continue in California now that the feds have withdrawn a proposed rule designed to protect them. Photo Credit: NOAA
by ElObservador 12/29/2017

SACRAMENTO, Calif. – The federal government is harming endangered species by disregarding the science when making political decisions, according to a new report.

The study, Suppressed: How Politics Drowned out Science for Ten Endangered Species, cites as its first example a decision in June by the Trump administration to withdraw a rule proposed by state and regional authorities to protect the Pacific Leatherback Turtle from drift gill nets used to catch swordfish.

Derek Goldman is the Northern Rockies field representative for the Endangered Species Coalition, which sponsored the report.

“In spite of the Endangered Species Act requiring the best available science to be used in decision making, that’s not always the case,” Goldman laments. “There’s pressure from politically powerful special interests, who often unduly influence the decision-making process. It undermines science as well as wildlife conservation.”

There are only an estimated 2,300 Western Leatherback turtles left in the world. Other threats include ingestion of trash and illegal harvesting of eggs.

The report also highlights the threat from U.S. Interior Secretary Ryan Zinke to rewrite the conservation plans for the greater sage-grouse, a small bird with habitat that ranges from California to Montana. Goldman says the plans were a grand compromise, years in the making, intended to keep the sage grouse off the endangered species list.

“In the case of sage grouse, it’s really pressure from the oil and gas industry,” he says. “They don’t like the habitat conservation measures to protect sage-grouse breeding areas, known as leks.”

In addition to wildlife, the study includes the case of an endangered plant in the San Jacinto area of southern California, which is threatened by development – and it chides the U.S. Fish and Wildlife Service for failing to list as endangered the Hermes copper butterfly, native to the San Diego area.

10 tips to find the best smartphone for you

The ABCs of Trump’s Political Demise