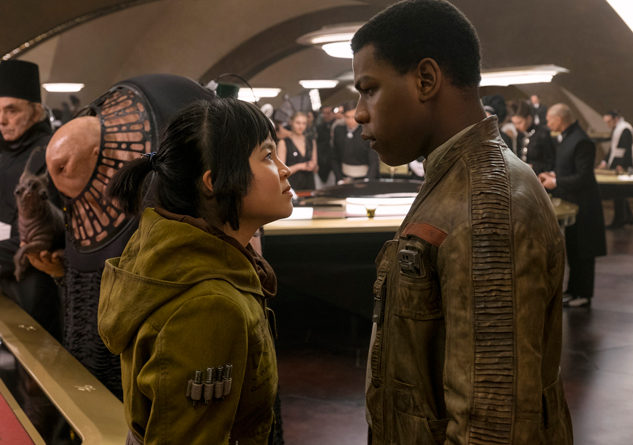 The newest member of the “space opera” saga talks about her experience with Star Wars: The Last Jedi, her research and connection to the Vietnam War, and buying her own action figures at Target

Kelly Marie Tran is one of the new cast additions to the ongoing Star Wars series that began in 1977 with “A New Hope”.

With “The Last Jedi” hitting theaters this Friday the 15th, the continuing story of the good versus evil in a universe set in a “space western” starts off with the military force of the Resistance, led by General Leia Organa (portrayed by the late Carrie Fisher), and the efforts to thwart the antagonist and very fascist-like First Order, which threatens to exert its dominance throughout the universe by force, as fascist governments will do.

Tran plays the character of Rose Tico, a never before seen character who is an engineer for the Resistance.

As a Vietnamese-American, Tran is the first Star Wars character played by an actor of Asian descent in one of the main Star Wars films.

Last year’s spin-off Rogue One: A Star Wars Story, (which is set in the same galaxy and connects to the main films) had the first instance of Asian and East Asian actors in its 40-year history.

Although our real human race relations aren’t explored too much in the fictionalized and alien filled worlds of the Star Wars universe, it was important enough for Tran to be a representation of the plenty of Asian fans that exist in the world and love the diverse, galactic stories of that have cultivated near universal appeal.

As the title suggests, there is war in Star Wars. Tran says that part of her own research for the character was something tied to her parents own immigrant story, the Vietnam War, which she says is a connecting element to her own self and the character of Rose Tico.

So, without further ado, Kelly Marie Tran shares with us a glimpse into what her character is all about, working with Director Rian Johnson and fellow actors, and how she feels getting the “I’m in a Star Wars movie” effect (which includes buying several of her own action figures).

What has been your background with Star Wars franchise? Were you a fan beforehand, or watch it as a kid?

You know what’s funny is I actually didn’t grow up with the franchise. My parents were in a different country when those first films came out and I think that Star Wars is something that is pretty stereotypically passed down in families, generation to generation, and because my parents hadn’t seen those first movies I wasn’t introduced to it as a young kid. Then I sort of grew up and was aware of them, but I didn’t see them. I actually didn’t fully sit down and watch all of those movies until I was cast in [The Last Jedi].

Could you talk about the process of getting the role?

I mean it was all supposed to be a huge secret, but the casting office had sent my agent an email which said, “Untitled Rian Johnson Project”. At this point if you googled his name you would see he was gonna be on Star Wars, so it was pretty easy to figure out what he was auditioning for. That being said we didn’t have any real information in terms of what they wanted the character to be like. We didn’t have the character’s real name and when we got to the office we couldn’t even prepare. We had to kind of give a cold read of the material. And that audition went on for five months. It was pretty crazy, I mean, there was a surprise chemistry read (script read to see how hired actors work together) with John Boyega, there was a final test in London, it definitely felt like I was being hazed or something.

What was your reaction to being cast in the “The Last Jedi”? I mean, it’s a Star Wars movie!

I was just purely shocked. I think that when you want to be an actor or a performer of any kind you know how impossible it is that you spend 8-10 years working at the thing that is seemingly impossible, and you imagine this moment where someone gives you what you want and you imagine that you’re so excited and ecstatic, and completely over the wall happy about it but when it came down to it I was just pretty scared. And nervous. When they told me I got the part I was in shock, I don’t think it really registered for a full minute, and then I was scared. The funny thing is when I finally got to set and once I was working with Rian, John and all the other cast members I felt at home, which says a lot about everyone else and it just means that they were so welcoming and so open and generous with all their advice as well as their acting work.

That’s fantastic. Now, could you give us a synopsis, or as much as you can divulge, about your character Rose Tico? Where has she been in the Star Wars universe up until now?

So, Rose is a member of the Resistance but is not someone who is at the forefront of the Resistance at all, she’s definitely someone who is kind of a background player. I’d like to say that if she was in The Force Awakens she would’ve been one of the extras running around in the background on the Resistance base. She’s a mechanic so she’s the person that provides Finn and those guys on the frontline with the tools they need to fight the First Order and in this movie she meets him for the first time [with] sort of a difficult reaction, and we see how she feels about it.

What kind of research did you have to do to prepare and get into the mind of Rose Tico?

A lot of things. I think that initially what Rian had given me was already so rich and full of life, what he had written on that paper but then outside of that  I definitely did a lot of research about what it was like to be an engineer because I’m not an engineer, so I read a lot of books about what it is to be an engineer and what it is that they do, the idea of having minds that work like nuts and bolts, logically. So, you’re able to find or look at a problem that is seemingly impossible and come up with solutions for it.

Thank you for that. Now, as we’re winding down, I wanted to ask about some products I’ve noticed that are based around Rose Tico. There is now a model of luxury heels modeled after your character, made by Louboutin. Have you seen them, and what’s that like?

It’s so weird right? It’s so crazy. Rian had sent me a photo before, because I didn’t really know that it was happening. But what’s crazy is that with Star Wars and how big it is. It’s sort of a juggernaut in pop culture, it’s so crazy to see how it’s kind of permeating through a lot of different types of products and markets. It’s insane to me.

While we’re on that topic, how does it feel having an action figure modeled after yourself? It must be interesting seeing your face in the toy section.

Yeah, it’s totally bizarre. I own multiple of my own action figure, I own multiple of my Lego set only because I go to Target and I always feel like I want to buy it. It’s such a weird thing to go to Target and buy your own merchandise and I always try to push it towards the cashier to see if they recognize me but they never do. It’s such a weird experience and I don’t think that I’ll ever believe that it’s me because I own a lot them, and I see them a lot and I think that it’s still very much an out of body experience for me.

Final Question: What can people expect when they go see you as Rose Tico on the big screen alongside the other heroes of “Star Wars: The Last Jedi”?

State of CA: Keep Cell Phones Away From Your Body