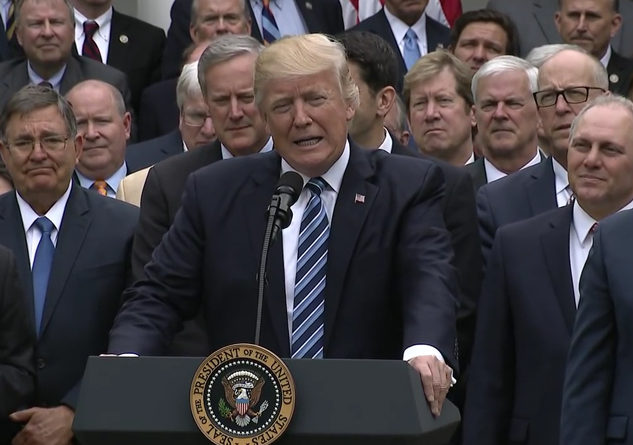 The Republican Party is trying to push sweeping tax reform, but is it good for everyone? Photo Credit: wikipedia.org
by ElObservador 12/01/2017

As it stands, the Republican tax bill will do more harm to the average American through its hidden incentives and repeals

The Trump Administration wants a sizeable win before the end of the year, and they’ve focused on something that is the most probable candidate to deliver that win, tax reform.

Until recently, the dizzying distractions and derailments from Washington D.C.; be it the sexual harassment accusations hitting both parties, or the infighting from the two would-be Directors of the Obama era Consumer Financial Protection Bureau (CFPB), have proved to push the tax goals to the fringes of the Republican party’s focus.

As they need a legislative win, Republican lawmakers are attempting to pass their tax legislation as soon as possible, or before their own deadline, (after all, the party controls the major branches of government), which is slated for December 8th; the same day as there needs to be a budget decision to prevent a possible government shutdown.

Now that the self-imposed fire is heating up under their Republican heels, the Trump Administration, mainly with Trump and his very pro-tax plan tweets, have vowed to get this to the finish line before the year is up.

As of now, Republicans far and near have little to say, or very vague statements on how this tax plan will help or hinder the common American.

Beyond the party, the people most affected by this are in the end Americans, and they should have a clear understanding of what will happen should this tax plan go through.

This isn’t a bipartisan issue, people need tax breaks, but this most recent attempt at a tax “fix” will benefit corporations, the wealthy, but misses the most vulnerable populations, the elderly, low income, and students. In fact, the passage of this bill will ultimately hurt them.

According to the Center for American Progress, the tax bill will cost $1.4 trillion dollars over the next decade, and although the plan does not explicitly say that benefits or services will be cut to pay for it, there is an automatic “trigger” that will go off when the cost of these tax breaks reaches a certain amount, where federal programs will be cut. $25 billion will be cut from Medicare as soon as 2018 and an additional $111 billion would be seized from other programs.

Many safety net programs will be affected, programs that millions of Americans use at different points of their lives. These cuts as of now, will live beyond the lifetime of this tax bill.

Cuts for All, Kind of

Next year it will seem as if a lot of the population who takes a regular deduction will see at least a small tax cut, and it’s true.

According to CNN’s Dean Obeidallah, “middle-income households (those earning $50,000 to $90,000 a year) would receive a tax break on average of $660, or 1.2% of their after-tax income. While they would get an initial, tiny tax cut, the numbers would get worse over time.”

If the average savings is around $600, that is not enough for a vacation, even a mortgage payment in some places (certainly not in the Bay Area).

One of the problems that begins in 2018 is with those that take itemized deductions when preparing their taxes. Because this tax bill will do away with certain state and local deductions, like charity donations, it is expected to hike taxes for those that prepare their deductions in this manner.

Another striking piece of this bill is that although in the first years there will be tax cuts and breaks for those that aren’t in the 1% or making over $1 million, in 2027 and beyond, things get unremarkable for those not in those wealthy brackets. By 2025, in 7 years and 1 month from now, the benefits of this tax plan will expire. No more tax cuts, end of the ride.

According to The New York Times, for those in the middle-income bracket, this doesn’t just mean going back to how taxes were done in 2017, but paying more on top of that. “Changing the measure of inflation used for many tax calculations — would not expire. As a result, two-thirds of middle-class households would get a tax increase in 2027, and none — zero percent — would get a tax cut.”

While this is going on, corporate and business tax cuts would not expire after 2027 under this tax bill.

The idea that business owners would be generous enough to pass on these extra savings down to their employees is a nice one, but wouldn’t be enforced. In corporate structures, the Times states, “Executives and other top earners would probably get the biggest boost. People who own stocks or have other business investments would see a direct benefit from corporate tax cuts.”

Through all of this, medical insurance may rise because of the reduced funding from cutting services through the aforementioned trigger. Americans may pay less taxes but may pay up for it medical costs. Another note is that the Affordable Care Act’s non-insured fee will cease to exist, but again, it’s about the factors of individual families and persons to figure it out if this bill will ultimately be good or bad at first.

In the end, it’s as simple as this: if your household makes under $75,000, your taxes will rise more than they are now in the next few years. You will get a slight bump through the immediate tax cut in 2018, but depending on how you do your taxes and your financial situation, your mileage may vary.

Since American families are so diverse when it comes to their economic status, it can’t all be calculated until you’re with a tax preparer or inputting data into tax software.

It’s been a bumpy road so far and if the tax reform goes through Congress, there will be a whole other set of bumps for working Americans in the form of tax increases. Yet there lies hope in that this version of the bill is not finalized, and until it is approved or struck down, it will all be speculation before Americans across the country go to their taxes with these new implementations.

Q&A: Meet the Founder Behind the App that Helps Farmworkers’ Health