Hilltoppers Academy Brings Fun to Basketball and Growing Up 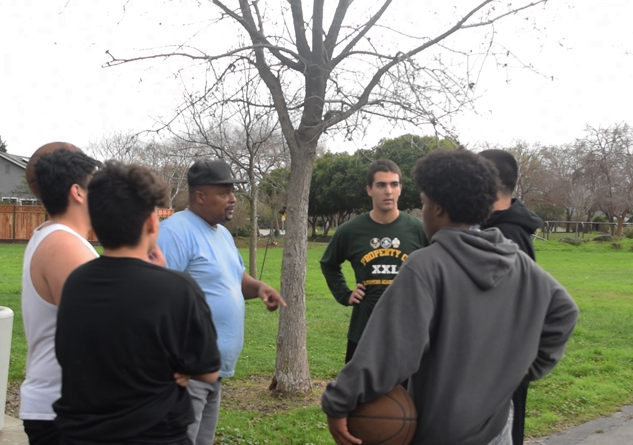 Coach Shaw with some of the Hilltoppers in South San Jose, CA. Photo Credit: Estephany Haro
by ElObservador 06/23/2017

In South San Jose lies a basketball team made up of young men of multiple ages and backgrounds, and their aim is not just to learn about the techniques of the sport. Basketball is just one focus of this squad, as they learn just as much about life, and themselves.

The team belongs to the Hilltoppers Academy School, founded in 1977, which has had over 8,000 students come into the program and learn the basics of teamwork, determination and camaraderie through the lens of basketball.

Steve Shaw, or Coach Shaw as he likes to be called, ties this group together. Through bonds formed within the confines of basketball practice, trips across the state for competitions and the yearly World Games competition in San Jose, the Hilltoppers Academy and Coach Shaw by extension, strives to endow the players the necessary teachings that merge the sport and its rules and life coaching that follows them long after they leave the team.

One of the players, Adrian Stephen, notes, “He helps us learn responsibilities and other ways than just basketball.”

The Hilltoppers Academy takes at risk youth and those within the County under benefits programs, probation and foster systems and bolsters their education with the aforementioned life coaching, college preparedness and beneficial trips to four major colleges: University of Oregon, University of Washington, Saint Mary’s College, and Wichita State University, a public state university in Kansas.

Coach Shaw began his journey as the leader of the group after working as a coach at a local San Jose YMCA. “I played college ball and also played high school ball as well and actually what was happening was I had the YMCA East Valley contract, they asked if I would come down and coach one of their little league games. It was just playing and having fun. I said ‘sure I’d be happy to’. As I did that they asked me to continue coaching.”

It was during this time that this coaching gig began to develop into something more, eventually giving rise to the program functions that make up the Hilltoppers Academy that exists today.

Shaw adds, “In that same timeframe, there were some kids that were coming to the Y, and at this time the Y was very small, it was not the way it is now. It had no gym, no swimming pool, with a little basketball court in the back. I noticed that they were a little down and asked them why they were down. One of the kids was saying ‘I’m not playing basketball anymore’.”

The group of youths had not gotten the grades necessary to continue their pursuits of team basketball at school and so Shaw took it upon himself to create the space and structure that might have allowed these children to continue their extracurricular activities.

“And so I said ‘Oh, I might be putting a league together, maybe you could play’. I said that’s a shame that you guys might not be able to finish your league. I know when I played ball, that was a big motivator for me in school.”

In 2017, the same thinking goes into the youth that start up into the program. Meeting them in person, in a basketball court in South San Jose, it’s easy to see which group out on the courts is part of the Hilltoppers.

Ivan Orzco Cardenas who has one year into the academy, sees the program working for him through the various areas of his life. “One thing I like is that it’s for us, and Coach does it for us, I like the environment we have with teams from other cities and it’s a good experience. [Coach Shaw] just makes you think about what you’re doing offsite, family, health. You’re gonna fix it. That’s how he teaches you, with responsibility and the things he asks you to do on the court, it betters you as a person.”

Nima Yazdani has been playing basketball since he was a kid. Introduced to the Hilltoppers by a friend after high school, he was looking to play college basketball and so he says, “I contacted Coach Shaw and he said come along. He’s helped me a lot since then, and he showed me a lot of mental parts about the game I didn’t know and a lot of small points.”

Almost every student of Coach Shaw’s says similar things about the team and how it has helped advanced them in different ways. Each one has their own strengths and hurdles, but the main thing to take from it is that the team has grown and works together on and off of the court. All talk about the power of teamwork.

This weekend of June 24-26 marks the 13th annual World Games tournament at the Santa Clara County Fairgrounds, hosted and put on by Coach Shaw and the Hilltoppers Academy. Here they will play as part of the many teams that will compete amongst a slew of activities like video game tournament area and community outreach events and participating organizations.

Player Noellonnie Shaw adds, “It’s pretty much a tournament but more than it’s also a tournament that considers parents, so they can have something to do. We do bigger things than other tournaments do, things that make it easier on everybody else, not just players. We’ll have booths everywhere for parents so they can do other things. It’s just a fun time for everyone.”

Ivan says, “One thing this coach does is he takes time with you, with each person, he creates a relationship, he clothes us when we go on the road, a lot of coaches don’t do that. It’s a different environment. He shows you how life looks like on the court, that’s how you learn as a person. That’s how you grow. He helped me with school a lot, just having good instinct with myself. Knowing of my surroundings and who are the good people in my life. Who’s there for me. It’s like that. It’s not always about basketball. Yeah he does help, I love this program. It’s a life changing experience. Really, if I did not meet him honestly I would have went the wrong direction. It’s sad to hear, a lot of kids going the wrong direction.”

Nima adds, “One thing I learned that’s different that other teams is that Coach Shaw teaches you to play for one another, and not by yourself. To pass the ball more, not be selfish, and think about other players on your team before you think about yourself.” In the end, that’s what is stressed at the academy. To grow together, with the support system of the staff and each other, and do things for the greater good of the group.