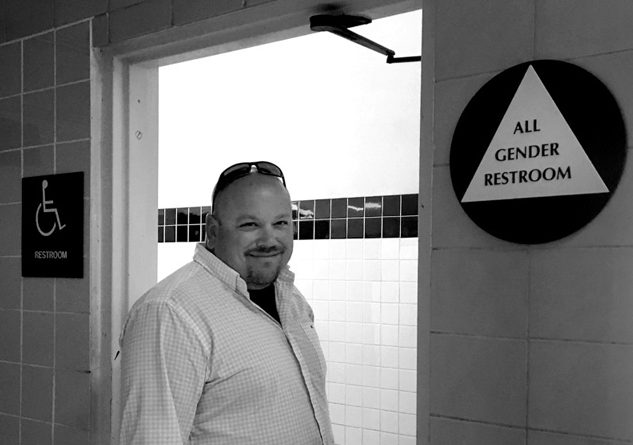 Principal Hewitson in front of the gender neutral restroom signage.
by ElObservador 06/23/2017

When it comes to Pride month, myself and others in the LGBTQ community come to cherish the weeks we can publicly take pride in our identities. It is also a time to be proud of our accomplishments in the communities as students, teachers, mentors, family members, and advocates for our causes as well. Just a few months ago was the first year anniversary of San Jose’s Lincoln High School’s all-gender restroom installation, on first floor of the main building.

It had began as an idea that seemed unattainable to us. In January of 2016, during a casual lunch meeting of our club, the Queer Student Union (QSU), myself and other trans members were discussing the discomfort of public restroom use. There were single gender neutral restrooms available to students, but they were incredibly far from any main classrooms, lockers, or lunch tables. We often would talk about this situation lightheartedly, suggesting some sort of outdoor bucket option for students who didn’t fit the gender binary.

Still, it occurred to us that many public facilities in California had adopted gender neutral restrooms with good results. Why not try to advocate for this change? And Lincoln High did make efforts to allow students to make suggestions to improve the community.

Unlike student initiatives in the past to install more water fountains or daily activities, we knew the discussion of an all gender restroom was controversial, uncomfortable, and to some- downright offensive. How could we go about approaching this respectfully to a wide audience?

Our fellow member Deena Umeda was conveniently assigned to do a PSA in her film class that very week. Deena is not trans, but many of her closest friends and classmates were, and she wanted to use this project as an opportunity to advocate for our idea- in addition to getting a good grade on the project.

The short film depicts the discomfort of a non-binary student who feels uncomfortable choosing between the boy or girl restrooms. Then, a diverse array of students speak to the camera candidly about the merits of a gender neutral restroom. The speech was written by our non-binary member, Teague Shattuck. I was responsible for lighting and cinematography. Students from our the QSU spoke to the camera. Deena painstakingly edited it all.

When it was finished, it was published on Vimeo under our teacher’s account and distributed to all of Lincoln’s staff, as well as to the San Jose Unified School District. We scheduled a meeting with our principal, Matthew Hewitson, to begin the discussion.

For a few weeks, things were frustrating. We had encouraging meetings with Mr. Hewitson, where he showed a sustained interest in our project. We were excited to see that teachers had shown the videos to their classes as a demonstration of student advocacy, but it led a few students to approach us in the hallway and ask us why we’d want to do this. “Nobody cares,” some would say. “Why do you want to create so many problems?”

There were four restrooms in the main building, two on the first floor and two on the second. The upstairs restrooms were often less crowded, but still very accessible. We wanted to convert the upstairs men’s restroom, which was almost always deserted, to an all gender option.

After communicating this to the district, they responded to Mr. Hewitson that it couldn’t be done. He met with us after school to let us know a district official stated that any restroom with a urinal in it cannot be made accessible to female students by official district code.

Could that really be true? We hadn’t heard such a thing before, but the statement coming from such a high up place made us discouraged. I pored over San Jose Unified School District official policy towards restroom use. We could not find anything that supported that statement. We insisted Mr. Hewitson and the district keep an open mind and investigate the truth behind that claim the same way we did. It had been the culmination of months of work, and it seemed like it wasn’t going to happen.

A few weeks went by when I was pulled out of class after completing a chemistry quiz mid-morning. The group of students spearheading this project were sat in the main office. We were called into the principal’s office. We all sat down anxiously to hear if he had reached a final verdict.

He said he valued our words and contributions a lot, that our video was effective, and that there is no district code preventing this change from happening. In fact, he wanted two restrooms on the floor of the main building to be converted instead.

By April 25th, the boy and girl restroom signs were removed, and “All Gender” restroom plaques took their place. In an effort to spread our story, we submitted the original PSA to multiple film festivals. The video won third place in California Alliance for Arts Education’s Student Voices Campaign of 2016, out of over 300 submissions, and was screened at San Jose Digital Arts’ annual San Jose International Film Festival in Santana Row. Deena, Teague, and I have gone to tell this story from conferences of teachers to the next round of student advocates at the Student Voices Campaign of 2017.

One of the most affirming reactions to the bathrooms is how little reaction there was at all. Not only do the bathrooms create a safe environment for a significant number of our peers, but they are used comfortably and conveniently by all students. Besides concerns from parents and a religiously affiliated student club, I’ve spent this entire school year seeing students from all backgrounds and gender using the restroom; being polite, discussing schoolwork. The bathrooms are unremarkable the way any other school restroom is supposed to be. Such a quick acceptance from Lincoln’s large student body is revolutionary itself.  My friends, our club members, our school staff and administrators, and I take an enormous about of pride in this project. Those of us who spent the many months advocating for this change can go on knowing that these restrooms will remain all-gender, long after our 2018 graduation.

In this current political climate, it’s important for LGBTQ citizens, especially trans people who see themselves intensely criticized in the media, to practicing being proud. Pride is not just the stereotype we see in the media of rainbows and glitter and dancing in the street. Pride is taking one’s own personal time to recognize the contributions that LGBTQ people make to the community and society. Pride is empowering queer people to imagine a radically open minded world is available to them from their influence- regardless of what is happening nationally. I like to think these bathrooms at Lincoln High School are just the first of many local accomplishments to be proud of.

Hilltoppers Academy Brings Fun to Basketball and Growing Up