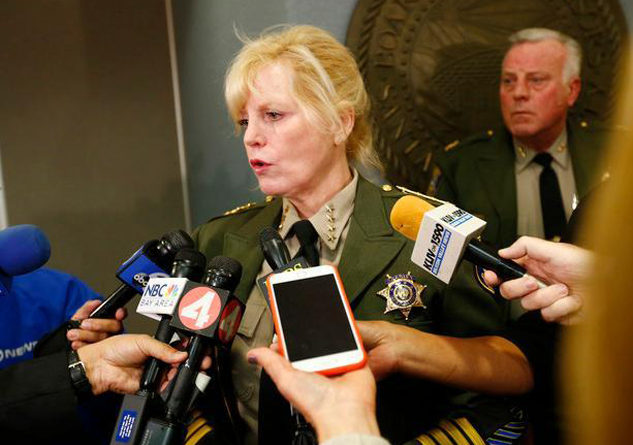 Sheriff Laurie Smith of the Santa Clara Sheriff’s Department, talks to the media about the new reforms at the Main Jail following a press conference at the Santa Clara County Sheriff’s Office in San Jose, Calif., on Wednesday, Dec. 2, 2015. The changes were announced after the agency found that 43 percent of the use-of-force complaints at the Main Jail were made by correctional deputies and officers working the D-Shift. (Gary Reyes/ Bay Area News Group), Photo Courtesy: The Mercury News
by ElObservador 01/13/2017

The article authored by Scott Herhold (Mercury News, Local News Section, page B1, January 8, 2017) entitled “Sheriff Should Be Replaced in 2018” presents the case for finding a suitable candidate for the Office of the Sheriff. The reality is that the election of a new Sheriff needs to be part of solving an issue addressed by the “Blue Ribbon Committee” which was assembled to look into the circumstances resulting in the alleged ‘beating death of Michael Tyre by three correctional officers (November 2015). The ‘Blue Ribbon Committee examined and made recommendations about several issues (Complaint Processing, Inmates Fund, etc.). An offshoot of the Blue Ribbon Committee began dealing with operational policies, procedures, and most importantly, alternatives to incarceration. Alternatives to incarceration will require that the Superior Court of the County of Santa Clara be engaged and involved. Especially if a variety of Behavioral Health Services programs are implemented in lieu of jailing an individual who will not require traditional ‘protective custody’. The outcomes may be a significant reduction of operational costs along with ‘social costs’ heretofore not assessed.

Herhold’s article leaves out one important proposal: Should the Sheriff be an appointed professional employee who reports to the Board of Supervisors? Or the County Executive?

This option needs to be placed on the public policy table because there is no way to perform a timely performance evaluation on any elected official. This responsible position merits being a ‘paid professional member of the law enforcement community’ who reports to an appointing authority. The current arrangement of having an ‘elected Sheriff’ is a major part of the challenge being faced by the County as 1) a new jail is being planned, funded, and will be constructed; 2) changes are happening which need to be implemented in order to rehabilitate inmates considered good candidates for rehabilitation and/or therapy; 3) these changes must be considered, evaluated and accepted by the Superior Court whose judicial proceedings must begin to issue sentences which involve mental health therapies and behavioral health programs. In the future judicial system actual incarceration of very dangerous criminals will become the ultimate option.

In addition, the entire operations of the OFFICE OF THE SHERIFF need to have a Citizen’s Oversight Commission whose purpose is to perform authorized monitoring of all aspects of law enforcement and custodial services. At present, the taxpayers continue to pay the cost of operations without ever receiving any independent performance reports or evaluations. Progressive changes cannot happen when there is no official data permitting informed discussions. Creative solutions never occur where ignorance exists.

The present practices of the Office of the Sheriff is to not release information about its operations. In fact it was a graph attached to a Realignment Program report that revealed data about inmates. The report concerned inmates from the California State Correctional Department, which, under Federal Court mandate, began to send their state prisoners home to county jails to relieve their very crowded state prison environments. Under the leadership of former Mental Health Director Nancy Pena, a selection paradigm was developed. It was under this paradigm that only selected state prisoners who were: a) non-violent; b) not drug-addicted and c) non-sexual offenders were eligible. This Realignment Report presented aggregated data which did not violate any individual prisoner’s privacy, which is the excuse usually used to not provide any information about the County Jails.

That graph revealed that of 3,800 county jail inmates, 50% (1,900 inmates) were Hispanics; 14% (532) were African Americans, and 2% (76) were Asian Americans. So jails in Santa Clara have 66% persons of color as inmates, much like county jails or federal prisons throughout this nation.

Some months ago, EO noted that the Coroner Medical Examiner reported to the Office of the Sheriff. In my mind this amounted to a conflict of interest in that any information about any autopsy of an inmate who died while in ‘protective custody’ could be ‘strategically delayed’. Is that what happened when that female inmate died in the Women’s Jail at Elmwood? I would suggest that the Medical Examiner report to the Department of Public Health. SCVMC need not be an option because on rare occasions it may have a conflict of interest.

In addition, at one time the Correctional Department, which is responsible for custody services did not report to the Office of the Sheriff. Their custodial services also need to be monitored by a Citizens Oversight Commission.

Now ‘Why should a Citizen’s Oversight Commission’ look over the shoulder of the Sheriff and the Correctional Department? Constituents have a right to know that responsible accountability exists. As a IPA Citizens Advisory Committee, I learned that only 4% or fewer of police officers were involved in over 90% of incidences such as rude behavior, inappropriate use of violence; etc. This IPA monitoring and oversight operation balanced to some degree the practices of SJPD Internal Affairs. It promoted development of a comprehensive incident reporting system which enabled implementation of ‘mental health crisis intervention skills’. Tools like the tazer were adapted which reduced the use of hand guns.

I recommend that SCC’s Board of Supervisors look into 1) having the Sheriff be an appointed executive employee; 2) Assess and authorize ‘Citizen’s Oversight Commissions’ for the Office of the Sheriff and the Correctional Department; and 3) initiate the necessary County Charter changes removing the Sheriff as an elected official and establishment of an ‘appointed Sheriff’ as a County executive/employee. Remember that an elected official is never really evaluated except by being replaced during the next election. There are and will be ‘custodial care’ incidents which need timely reviews. Things will never be improved or mitigated until the public knows what is going on in a timely manner. There is no way to quickly replace any elected official so if the Sheriff had been a professional employee, I am certain that the Michael Tyree case alone would have been enough to replace Sheriff Laurie Smith some time ago. If this county is to implement ‘alternatives to incarceration’ along with other improvements, now is a good time to restructure those departments which are responsible for ‘law enforcement’ and custodial care.