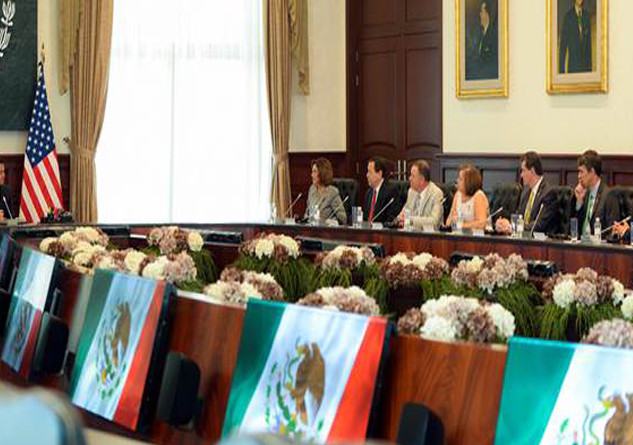 “On Sunday, we began a bipartisan Congressional visit to Mexico to strengthen our long-standing friendship and strong bilateral relationship, and to advance our mutual goals of regional stability and prosperity.

“At Los Pinos, we appreciated the opportunity to visit with President Enrique Peña Nieto and to engage in a productive dialogue on security, the economy, migration and human rights issues – including the disturbing disappearance of the 43 Mexican students.  Regarding security, we discussed ways to enhance mutual cooperation to combat transnational crime.  On the economy, we underscored the economic benefits to both of our countries of an integrated economy in North America and discussed the Mexican government’s recently proposed labor reforms.  On migration, we agreed to continue to work together on a regional approach that addresses the root causes of Central American migration and provides the highest legal protections for unaccompanied children.

“Secretary of Foreign Relations, Claudia Ruiz Massieu attended the meeting with the President and also hosted a delegation dinner with Undersecretary for North American Affairs Paulo Carreni and incoming Ambassador to the United States Carlos Manuel Sada Solana – with whom Members engaged in a productive dialogue on the best ways of promoting a better understanding of our two countries’ importance to each other.  We all agreed that diplomacy goes hand in hand with the strong cultural and family bonds between our two nations.  As Congressman Richard Hanna (R-NY) so eloquently emphasized, one in ten Americans has family ties to Mexico.

“Our bilateral engagement continued with an interparliamentary discussion with Mexican Senators and Federal Deputies, recognizing our shared values, our shared border and our interconnected economies.

“On the economy, we also had a robust discussion with Director General Roberto Zapata and other Secretariat of the Economy officials regarding the importance of an integrated economy in North America.  Mexico’s economy and the TPP were also subjects of our discussion with the American Chamber of Commerce representatives.

“Also, the delegation had an important meeting with members of civil society representing labor, LGBT, migration, civil and human rights communities.  They informed us about their work to address migration, encourage freedom of expression and association, and the ongoing challenges related to protecting workers’ rights.

“In our meetings including with the media, Congressman Hanna, co-leader of our delegation, emphasized that anti-Mexico campaign rhetoric is not a reflection of the thinking of the American people.

“The delegation is grateful to U.S. Embassy Mexico City officials led by William Duncan, Charge d’Affaires, for the informative country team briefings and the support provided throughout our visit.  We shared our enthusiasm about the imminent arrival of our recently confirmed U.S. Ambassador to Mexico, Roberta Jacobson.”