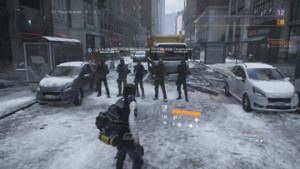 With “The Division” Open Beta having come and gone this past weekend, I’d like to take a moment and give you my thoughts on my experience playing this build of “The Division”. Keep in mind; this is a beta so some of the things i discuss here might not be in the final product which releases on March 8. For those who don’t know, “The Division” is a game by Ubisoft, makers of the “Assassin’s Creed” and “Far Cry” series. “The Division” takes place in Manhattan after the United States was hit with a smallpox pandemic on Black Friday, transmitted through infected bank notes. It sweeps through cities across the United States, causing the collapse of the government in five days.

Basic services fail and without them, the country quickly descends into chaos. Your controlled character is part of the Strategic Homeland Division or “The Division” for short – a classified stay-behind force of self-supported tactical agents who lead seemingly ordinary lives. They are trained to operate independently of command when all else fails. They operate under direct order of the President of the United States to do whatever it takes to prevent the fall of society and piece the city back together.

The beta included two co operative missions and the PvP, Player versus Player, area known as “The Dark Zone”. A zone where the JTF, Joint Task Force, failed to establish a quarantine zone and the citizens are left to fend for themselves. My Impressions of the Dark Zone are that it is very impressive. The cover system and shooting mechanics work very well. Reminds me of another excellent game in the Tom Clancy series, “Ghost Recon: Future Soldier”.

The loot system in the game is excellent as well. Being in a highly contaminated zone, the loot you find, which is better loot than the loot you find in the co operative area, is contaminated so you must get it decontaminated by, “extracting” the loot via helicopter extraction, in which all the players are informed of your attempt to extract your contaminated loot from the dark zone and they can either assist or kill you to take your loot. Your rank in the dark zone is different to the ranking you have in the co operative area. In the dark zone, if you attack another agent you will go “Rogue”, basically meaning that you have disavowed “The Division” and everyone on the server you’re playing as will hunt you down and get rewards for taking you down, while dying as a Rogue, makes you lose experience in the dark zone as well as Dark Zone Funds.

My style of playing was to take a moral high ground, only to engage agents when fired upon first so as to not go rogue. I found that hunting rogues is very profitable and was able to get the high end gear very quickly and have lots of funds left over to buy attachments and gear for my agent. I met a lot of online players in the beta, and we would band together as a squad to help each other to progress and hunt down rogues who would pick on players who are alone in the Dark Zone alone.

“The Division” is setting up to be an excellent installment in the Tom Clancy series of games. I for one cannot wait to get my hands on the game and go back and try to bring back order to the city of Manhattan. The Division launches March 8th and is available for Xbox One, Playstation 4 and PC.