Honoring the legacy of RBG 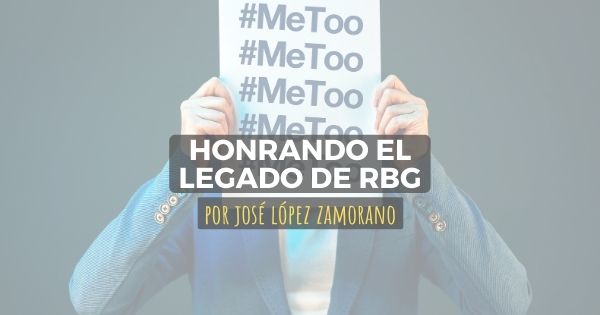 “It’s about time,” Ruth Bader Ginsburg responded when asked about the #MeToo movement during one of her lucid and generous public talks at the Sundance Film Festival in 2018. “For a long time, women were silent, thinking that they couldn’t do anything about it, but now the law is on the side of women, or men, who are harassed – and that is a good thing.”

While studying for her undergraduate degree at the prestigious Cornell University, where she graduated first in her class, Ruth Bader had been bullied when a professor offered her good grades in exchange for sexual favors. It was not the only adversity she encountered in her life. In 1960 she was rejected as assistant to the Supreme Court magistrate Felix Frankfurter for a simple reason: she was a woman.

Thirty-six years later, Justice Ruth Bader Ginsburg wrote the majority opinion of the Supreme Court in United States v. Virginia that dismantled the “male only” admissions policy of the Virginia Military Institute, arguing that it violated clause 14 of the Constitution that guarantees equal protection under the law.

Her close personal friend and ideological rival, Justice Antonin Scalia, voted against. The lifelong friendship between one of the sharpest liberal minds and one of the cleverest conservative minds continues to fascinate new generations. In 2008, Scalia solved the riddle as follows: “I attack ideas, I don’t attack people. Some very good people have very bad ideas.”

But in perspective, the ideas that Ruth Bader Ginsburg defended as the second woman to reach the Supreme Court seem to be more in tune with the sentiment of the American public than those of her conservative colleagues. She was a champion for the rights of women, migrants, the LGBT community and the mentally ill.

In one of her most recent cases, the magistrate known as Notorious R.B.G. she joined the majority opinion of the court, written by the president of the court, John Roberts, who considered as “arbitrary and capricious” the decision of the Trump administration to cancel the DACA Program unilaterally.

In 2016, she participated in the majority opinion of the court in a case that helped dismantle a Texas law that placed restrictions on clinics that offered abortion services. Three years after the case, she told The New York Times that, “the bottom line is that the government has no right to make that decision for a woman.”

Polls show that the majority of Americans support relief for “Dreamers” and want to keep abortion legal.

How then to honor the legacy of a fighter who fought against discrimination, against adversity, against cancer, against injustice and never gave up? Already on her deathbed, she fought her last battle: One of her last wishes was not to be replaced until the arrival of a new president.

The spontaneous demonstrations of young people in front of the Supreme Court after the death of a physically diminutive woman, but a giant social fighter, show that the new generations are clear about how to honor that legacy: mobilizing and calling to vote on November 3. One of the banners buried in a river of posthumous flowers could clearly read: “Today we cry, tomorrow we fight.”