FACTS AND TRUTH ARE THE FOUNDATION OF GOVERNMENT, ITS ECONOMY, AND MEANINGFUL SOCIAL DEVELOPMENT 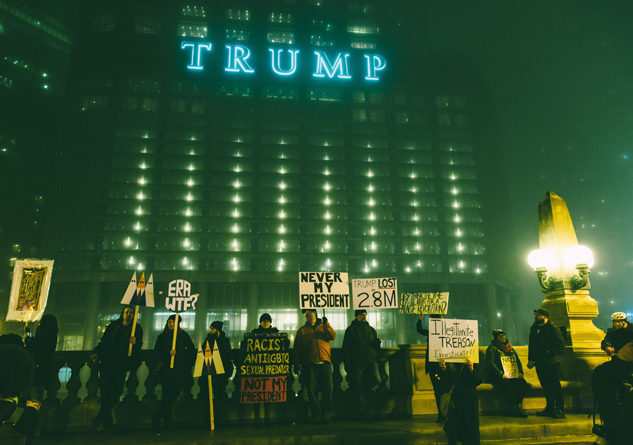 This presentation is about the ‘distrust damage’ Mr. Donald J. Trump is responsible for creating whenever he invokes ‘fake news’ and ‘alternative facts’ and declares that news media and its journalists are ‘the enemy’. Trump is an individual who disparage others whenever it suits him to attack governmental institutions and their elected officials. All because, in the moment he (Trump) does not like what they do or where ‘the thought process may go’.

A hallmark of Mr. Donald J. Trump, noted by many, is his ego-centric temperament which somehow motivates him to challenge the real world as it exists at that moment when he disagrees with what is before him or when his understanding is different. One thing is evident: Since being installed as USA’s President and to its world leadership position which ‘Superpower America’ provides, his spontaneous statements which include ‘alternative facts’, have had a domino impact resulting in higher levels of distrustful insecurity. Many nations have ‘strong authoritarian leaders’ who have mimicked Trump’s expressions and actions which label journalists and media as ‘the enemy’ who disseminate ‘fake news’ and ‘alternative facts’.

Consequently, many individuals do not trust the information content being provided by mainstream media. Individuals no longer know when Trump presents truthful, factual, and useful information.

History records the role of publications, especially books and newspapers, in their role as ‘the 4th estate of government’. This comes from the publication of verified analytical reports which hold corporate and elected officials accountable and responsible for their decisions and actions. Until recently, this was mainly performed by newspapers and their investigative journalists who have become the ‘enemy of dictators and autocrats’.

Without “truthful, factual and trusted information, human reasoning becomes chaotic and irrational. Basic paradigms of religion, business and science become ignored or neglected. It becomes very difficult to have a reasonable thought process leading to the best decisions. Appropriate public policy development is hampered, and quite often undercut. One feature becomes dominant: Those with wealth, economic power and governing authority will end up exploiting the working class who have not yet achieved a safe secure community life style.

In an article entitled “Will ‘Truth Isn’t the Truth’ Be the Vile Epitaph to the Trump Presidency?” (SJ Mercury News, page A11, 08.22,2018), Columnist Eugene Robinson wrote, “Whenever the Trump Administration ends, we already have its epitaph: “Truth isn’t Truth” {a Rudy Giuliani Remark}.

“As of August 1, (2018), The Washington Post’s indefatigable Fact Checker column had counted a staggering 4,229 false or misleading claims (made) by the President since he took office.”

During the 2016 Presidential campaign, candidate Trump kept asking for President Barack Obama’s birth certificate because he wanted proof that Obama was a U.S. Citizen. Similar tactics were practiced by White residents prior to the Civil War when anyone could ask any Black person, “Show me your papers”. This was the racial harassment endured by individuals who had become ‘free men’ or had somehow escaped their ‘slave environment’. This sort of behavior exposes the questioning person as having ‘white racist supremacist beliefs.

Many American residents believe in and try to show respect to others regardless of ‘race, gender, national origin, or religious faith’. They also believe that each individual has certain unalienable rights which include the ‘right to life, liberty and pursuit of happiness’ subject to America’s standards of ‘due process’ to have law and order in all communities. Evidently, Mr. Trump has his own standards.

During his many public presentations, Mr. Trump used words which incited his supporters to take unacceptable actions. “Get them out of here!!” is a statement he has made following assertions by others who disagree with him. His statements during political rally’s often encouraged certain supporters to ‘come out into the light of day’. These included the Ku Klux Clan, Neo-Nazis; anti-Semitics, White supremacists, and others who prior to Trumps election, kept their bigotry, bias, prejudice, xenophobia, and misogyny to themselves by not giving voice to these positions and feelings in public settings. Communities of color are prone to be marginalized resulting in diminished access to opportunity in education, jobs, social station, and property ownership.

Common sense coupled with scientific evidence-based knowledge and paradigms will prevail. Governor J. Brown Tweeted: “This is a declaration of war against America and all of humanity. It will not stand. Truth and common sense will triumph over Trump’s insanity.” (Source: Carla Marinucci and Jeremy B. White, Politico, August 8, 2018 6:17 AM email).

Silicon Valley is already a progressive diverse community wherein innovation, creativity, and inclusion are already happening. It is a work in progress. Facts and truth along with integrity and a trusting faith in god and others is the foundation of our democratic government, its economy, and its meaningful social development.

In wanting to provide more “factual, truthful and useful information”, EO needs your partnership support to sustain an expanded local community news coverage. So, consider supporting EO with a once-a-year contribution of $20 at <www.elobservadorfoundation.org>. Your partnership support will enable EO to publish more editorial content this community needs to be fully informed with ‘truthful, factual and useful information’. EO’s management is Hispanic and its employees reside in San Jose, CA. It is community-based newspapers which are focused upon community issues in business, education, health, entertainment, etc. Its product is entirely posted online at <www.el-observador.com> Resolve to be one of the 50,000 ‘partners’ @$20 each to provide EO with its first annual budget of $1,000,000. It is time for the community to support its local independent EO publication whose advocacy “pushes back” against Trumpism’s destructive actions.