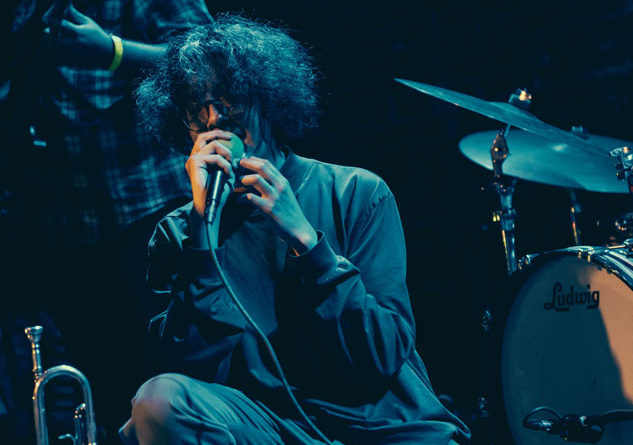 Omar Banos constructs electric ballads and romantic productions that take cues from Mexican music and anything else the 19-year old may be feeling as an inspiration at the moment. He also helps push the word out on immigrant rights and saving DACA.

The Hawthorne, CA native began his pursuits of music at the age of 8, and through his own self teaching and production, and with the help of social media, has drifted into a fame he did not expect while crafting moody music in his bedroom.

When asked about his artist name, Banos says, “My mom, she would always say I was ‘cuckoo’. But my family speaks Spanish so they would call me, ‘a cuco’. Like if I was crazy.”

What Makes an Artist

Banos has only been officially making music for three years, and in that time, mainly in the last 12 months, the artists’ time in the spotlight has been accelerated.

The music that most influenced him to get into learning to play an instrument were rock bands like Guns N’ Roses, Queen, what many young people listen to when they first sprout their musical tastes. Yet Banos went beyond just liking the music when he took up the guitar at age 8, with help from his mother.

His knowledge of instruments helps his producer side to come up with arrangements that shift genre conventions as if genres were kids in a bounce house.

Now though, it’s less specifically Axl Rose and Freddie Mercury that influence his music. “It’s a lot to be honest. A lot of it is old Mexican music, like Los Andy’s, Los Panchos, Juan Gabriel, Vicente, Pedro Infante, but then I guess it goes all over the place. All that, and psychedelic music, hip-hop, pop, trap.”

With his first production efforts, he unknowingly began to corral a certain type of sound that would be a sort of signature of his career thus far. In his music, the Mexican ballad and crooning is there, as well as oldies, and electronica with tinges of a lot more modern sounds too.

For example, 2016’s “Amor de Siempre”, which is entirely in Spanish, is a lyrically romantic song that sits atop a relaxed hip-hop beat with some slightly distorted French Horn accompaniment.

Banos is a bit hard pressed at giving you a straight answer as to what his music is in conventional terms. “Just like nostalgic and dreamy, I guess. I don’t know. That’s how I want to make people feel, some type of nostalgia, regardless if they’ve heard my music for the first time or not. Just to have that sort of feeling there.”

With two mixtapes out, “Wannabewithu” and “Songs4u”, he has accumulated enough material to have a “Cuco style”, as abstract as that seems to him.

Banos adds, “even now it’s not fully solidified, it still fluctuates back and forth. I don’t think I’ll ever have one specific sound.”

Living within 15 miles of the center of Los Angeles has given Banos a certain diverse cultural perspective that many Chicanos, and by that measure many artists from LA, can attest to. Being Latino and from a Spanish speaking household also means that Banos traverses two worlds of language and heritage simultaneously.

“It’s given me a very unique approach, coming from my own perspective. It kinda happens subconsciously, what I do. It just kinda happens, whether it’s the Spanglish stuff or the way I produce or what I play in the chords it all comes naturally because that’s what I grew up around. It just kind of like, occurs.”

Although he grew up with Mexican parents and Mexican music around, he says that the “Machismo” aspect that permeates the culture is not present in his music because of the way he grew up seeing the world.

“I’m just me. Like I saw it you know (machismo), Mexican family members, that was just something you would always see growing up. Honestly it was just my mom that got me out of that mindset and the way I grew up, I was just very open to everything that was in my environment so I wasn’t like, ‘you’ve gotta be a man’, I’m just me, and I’m gonna approach everything way differently.”

His music comes from a place of love, and fragility, two aspects that the Latino culture over the course of history has placed into gendered boxes. These boxes are those which men shouldn’t be opening too much, save for when you’re drinking tequila.

“It’s kinda hard because sometimes people will be like, ‘that’s kinda weird,’ but then you just give it some time and… It lets people be like, ‘alright cool, I’m going to do the same thing,’” says Banos.

Your Name in Bright Lights

Banos is very hesitant to call himself famous, or even an artist in terms of his actual popularity. Due to his social media presence, mainly Twitter and his interaction with supporters, he has cultivated a steadily growing fan base. Everything has come fast for the teenager, with his first live act only a handful of months behind him.

“Like last year, literally. It was my first show at this rap show, I did a little DJ set. All my homies showed up and the DJ had my music playing. Then after that I did backyard shows and then venues this year. Like March.”

His first show, at a live music venue in Northeast Los Angeles called The Hi Hat, was put on by his management, Mija Management, and was called “Solidarity for Sanctuary”, which as the name suggests, garnered support and donations for immigrant advocacy.

This show featured 4 other acts on the bill, and Cuco was not yet the sole player in the bright lights of the stage.

“I’m a very shy person and plus I’m not a spotlight person. I’m for sure a background person which, this whole thing about being the artist, is very weird to me. It’s like a love/hate thing for me because I’m raw talent every time I have a crowd in front of me, like I don’t know what to do.”

Since March though, a whopping 7 months have honed him into a more comfortable stage presence.

“I got used to performing though, I actually really like it, I guess just being the artist is kind of weird. I thought I’d be some background figure, which I’m used to.”

Banos says that the support from fans, both online and in person, is simply put, ‘crazy’.

His main channel of communication is Twitter, with his handle, @icryduringsex, having a follower count of 49.2 thousand as of writing. His feed is a mixture of music he is listening to, correspondence between fans and himself, as well as more intimate moments of self-reflection. Tweets like, “The fuck does one do at 19 tho I’m literally 18 but like… plus” are reminders of youth, and cement the duality of being famous in the digital age.

On one hand your stage presence, your skills as a musician are one thing, but being a teenager on the edges of fame make Banos approachable by fans, and what could be put as “the real deal”. In the past musicians have relied on PR and magazines to get in touch with fans, only within the last decade have they grabbed control to show their respective lives to fans and connect with them. With newer artists like Cuco, they are built and followed along on their baby steps and leaps into fame through their Instagram or Twitter accounts.

“Absolutely, social media was like the reason I’m famous in any way. I don’t really promote (my music). I just kind of let it happen. I let my supporters share it if they want to. I really just put music out, and if they like it they like it,” says Banos.

The band that plays within Banos’ Cuco project, all friends from school and the town, have been living what feels like a dream and slowly but surely want to bring their music to those that will listen. Banos adds, “We don’t do it for fame, we just like playing shows so it’s cool to live out the dream and just play shows. It’s crazy that there’s people going out there to watch us play.”

Currently Banos’ twitter profile name, (Twitter has a handle, the ‘@’, and a profile name you can change) is #DefendDACA, which prompts a question about his political beliefs.

“With the whole situation that’s happening with DACA, that kind of hit a soft spot for me because I personally have a cousin that received DACA. It’s actually really hard to watch undocumented families go through this panic because it’s like they come here and they’re getting help to go to school to live and work here and it breaks my heart that we have this political climate that we have somebody that really doesn’t care. To Trump, we’re all just illegal and that’s all we do and we’re just bad people and it’s that whole stigma that’s terrible.”

As a recent convert to the world of social justice and being angry about our government, Banos says he is doing his part to amplify the voices of people in his own community. His fan base is largely Latino, which leads to a lot of convergence between those issues that plague immigrants in this country and the fans that want to listen to his love songs.

“I just did my best to share as many links and everything I can because I’m not the most socially aware person ever, but I now have a platform and I can use it, and I can give a platform to the people. Another big part of it is that I know that I have a very limited knowledge of stuff because nobody really ever told me about all this stuff growing up. A lot of resources weren’t there. The least I could do is just really be a voice and use that voice to give other people voices, you know?”

By disseminating this information to his followers and fans alike, he in a way is bolstering the political movements that a large swath of Latinos align with (such as rights for immigrants and their families), creating new generations of politically informed individuals.

Banos has routinely participated in socially conscious concerts like the aforementioned first venue performance in March. “My manager, (Doris Muñoz), has her company, Mija Management, they do solidarity for sanctuary events. It was essentially raising money for undocumented families risking deportation. There was another one that was a Selena night thing but I didn’t perform, I just DJ’ed and raised money for that. I did another one in July at The Union, which is also a solidarity for sanctuary.”

With this in mind, Banos says that he will definitely be up for doing more of these shows which mix his bouncy, R&B/Mexican ballad crooning with social justice and awareness.

“We gotta do our part and really be there for our own people.”