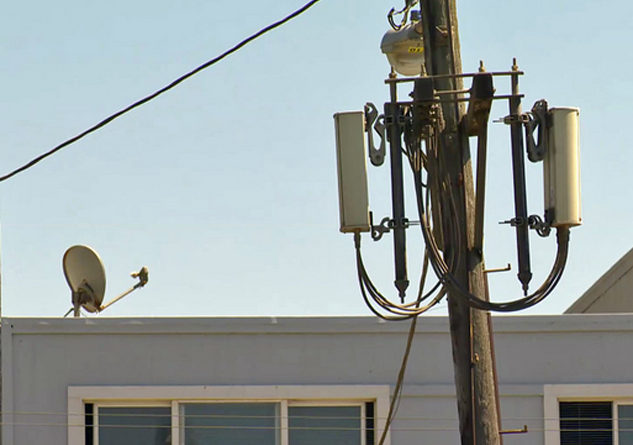 Senate Bill 649 would lead to a proliferation of cellular equipment such as this across the state. Photo Credit: Kevin Mottus/California Brain Tumor Association
by ElObservador 09/22/2017

SACRAMENTO, Calif. – A bill that would lead to the proliferation of refrigerator-sized 5G cell tower boxes across the state is now on Gov. Jerry Brown’s desk – and health advocates are pressing for a veto.

SB 649 would allow telecom companies to install 5G and other wireless cell equipment on poles and on the ground every few hundred feet without getting a permit from the local jurisdiction, cutting off public input.

Ellen Marks, director of the California Brain Tumor Association and chair of the California Alliance for Safer Technology, says there haven’t been any studies to prove 5G is safe – but studies have shown that older, less powerful cell technology can have serious health effects.

“There’s a U.S. National Toxicology Program that was released last year found that 2G was causing brain tumors and tumors near the heart in laboratory animals,” she says. “So employing 5G without any knowledge of health effects is not a good idea.”

The bill requires cities to allow large equipment boxes in the public right of way, so Marks says they could end up in front of homes, schools, libraries and parks, but not fire stations because firefighters have been given an exemption due to health concerns.

The Cellular Telecommunications Industry Association says the boxes are safe and will introduce super-fast wireless internet across the state.

Dozens of cities protested after the state Assembly passed the bill last week. Marks notes that Brown is now the only hope of stopping it.

“Our legislators took about $2.5 million from telecom in their last election,” she notes. “I don’t think the governor is concerned about campaign contributions any longer, so hopefully he does what is right for the state.”

Brown has until next week to sign the bill, veto it or let it become law without his signature.