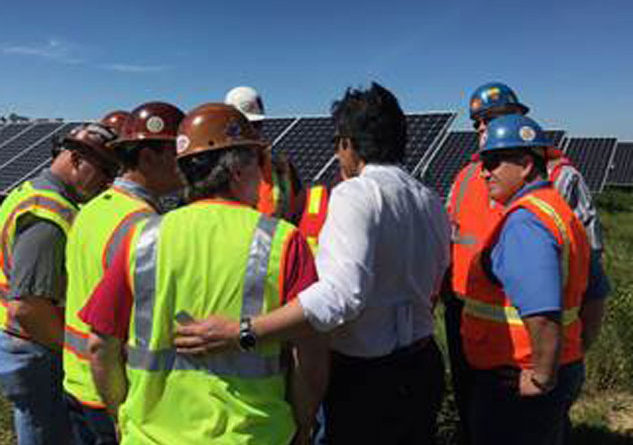 SACRAMENTO – The Senate Energy Committee passed a measure by California Senate President pro Tempore Kevin de León (D-Los Angeles) on Tuesday, May 9th to set California on a path to 100% renewable energy by the year 2045.  The vote was 8-2.

“This is the most ambitious target in the world, especially for an economy that dwarfs all but a handful of nations” Senate Leader de León said. “But our experience so far offers hard evidence that we can dramatically expand clean energy while also growing our economy and putting people to work.”

SB 100 will transition California to 100% fossil-free electricity and create opportunities for Californians of every background and socioeconomic strata, regardless of political preference.  In fact, there are already nearly ten times more clean energy jobs in California alone than there are coal-mining jobs in the entire nation.  This explosive growth and investment has been spurred in large part by California’s ambitious climate policies.

The Low Carbon Fuel & Energy Coalition said, “We also look forward to highlighting lifecycle environmental and economic benefits of key resources, especially where benefits accrue directly toward cleaner air and to the economies of challenged regions. We agree with Senator de Leon that California can and should continue to lead in these critical economic and environmental areas.”

““Not only is this vision essential for the world at large, but a fully renewable grid also secures California’s place at the forefront of one of the most significant economic transformations in the history of our planet,” said Jim Woodruff of First Solar and President of the Large Scale Solar Association.

The American Wind Energy Association said, “This bill isn’t just about long-term vision, it’s about near-term action.  The wind industry stands ready to create jobs and provide affordable, reliable, clean energy to Californians.  Wind energy is already a no-regrets alternative to fossil fuels, and it is a key component of a diverse, balanced, low-carbon grid.”

Nancy Rader, Executive Director of the California Wind Energy Association said, “Collectively, we have learned so much on the way to achieving 33% renewables – technically, legally and commercially – that we are confident that advancing the 50% renewables target to 2026 and setting a 100% clean-energy target for 2045 are both technically and affordably achievable.  Further, raising the 2023 target to 45% will provide a much-needed boost to the near-term renewables market, which is important to spur the repowering of many 1980s-generation wind projects in Kern, Riverside, and Alameda counties.”

Tom Werner, president and CEO of SunPower said, “Solar power development at all levels is a significant economic force in California, creating over 100,000 jobs, driving innovation and reducing the cost of energy.  Thanks to Senator de León and his distinguished colleagues in the legislature, SB 100 is a bold initiative that will accelerate economic opportunities and further improve our environment.  The world is watching California as it leads the global transition to a clean, reliable, affordable energy future.”

The California Biomass Energy Alliance said, “California continues to be the world leader in renewable energy and reducing carbon emissions.  SB 100 moves California one step closer to eliminating our dependence on fossil fuels.  To achieve this goal, California needs balanced energy portfolios that include an appropriate mix of all available renewable resources.”

SB 100 will be heard next in the Senate Appropriations Committee.

Anticipate Impact of AI, Automation and Robotic’s on Your Future Career Paths