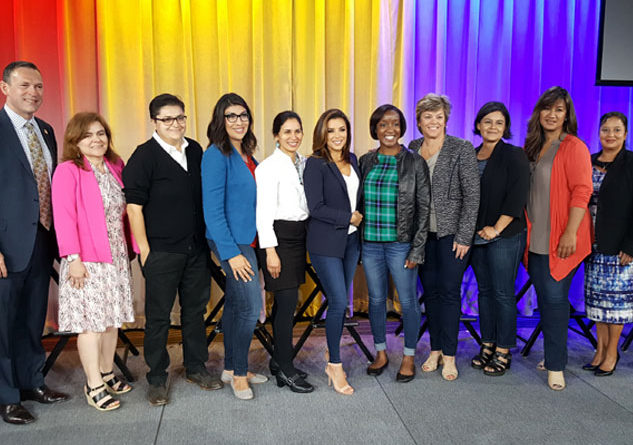 On Tuesday April 25th, 2017, Google was the host of the launch of TECHNOLOchicas 2.0 collaborative project, which has a goal in emphasizing the STEM model of learning to young Latinas across the country. The launch included many guest speakers, nearly all of them women, who are involved in STEM careers in tech, entertainment, business, and science.

Sponsored by Televisa, NCWIT (National Center for Women & Information) and others, the day was filled with guest speakers whose focus was letting people know, especially the young Latina girls present in the audience, that no matter their circumstances it was possible to become an engineer, vice president, or NASA scientist if they took advantage of STEM learning.

The speakers represented organizations and companies such as Televisa, Univision, Qualcomm and YouTube/Google.

From twins that work at NASA, to a MIT graduate who ended up in the male-dominated world of video games and eSports, there was a definite aura of female accomplishment and empowerment in the air, and rightly so. Each speaker had a unique background and entry point into their STEM career and throughout the day they elaborated on the how and why of choosing a STEM career.

The TECHNOLOchicas (or ‘tech girls’) were the ten Latinas at the event who represent the program nationwide. Their roles as guides to young girls throughout the United States encapsulates the need for STEM resources in regions where it is lacking.

One of the biggest themes in the forum was that of lack of access and how to circumvent that hurdle in education. Longoria added, “people always ask me ‘why Latinas?’ Well I am one, for starters, but if you look at the future success of the United States, and how it’s growing, the fastest growing demographic is the Latino community. If you look within the Latino community the people who are doing the hardest work, the CEO’s of the home, are the women.” Longoria’s belief, which is shared by many others in this country, (and unsurprisingly by everyone at the event), is to help this fast growing Latina demographic and provide a successful workforce for the future of the country.

The lack of minority STEM professionals over the years has motivated organizations like Longoria’s as well as gave way for movements like TECHNOLOchicas to fill the gap of information and resources to Latinas.

In regards to the lack of visibility to minorities of STEM, Longoria said, “we still encounter this. You cannot be what you cannot see, that is why today is so important, because we’re going to hear from amazing women who are doing the work, who are being role models.”

One of the TECHNOLOchicas, Madelyn Tavarez, an Android Engineer at Pinterest, said that she didn’t realize that customizing her MySpace profile for fun by manipulating the html code would lead to computer science. “I was really into coding back then, but I didn’t know that’s what I was doing. Once MySpace, you know, died, I completely forgot about coding because I didn’t know you could do it on platforms. I didn’t know that programming was computer science, I didn’t make the connection.”

After meeting computer science students from Istanbul she was put onto the idea of getting into engineering. “Then I realized that this was what I was doing from 14-16, and that it actually was for me!”

The lack of access was also present in the guest speakers’ stories, which more than anything helped to prove that it was, and still is a problem, but one that can be overcome.

Tara Chklovski, founder and CEO of science education nonprofit Iridescent, recalled her pilot father in India being the catalyst to her interest in tech. “He was my first point of entry, so instead of playing with Barbie dolls, because we couldn’t afford them, I played with engines. And so, that was very cool because after that I wasn’t afraid of anything.”

Lucy Flores, described by Longoria as a “recovering politician”, currently has the role of VP of Public Affairs at cross-cultural media company mitú. Her story was especially inspirational to hear, as she had previously been Nevada’s first elected Latina legislator, but not before some struggles.

“I actually ended up on juvenile parole by the time I was 15, I had a lot of problems growing up in a very low income community in northeast Las Vegas. I didn’t get my GED ’til I was 2.”

From there, Flores attended community college, then got into law. After her turn in politics, she became a political commentator for mitú during the latest presidential elections, and was almost immediately kept on as a VP in her current role.

All through the event, Longoria spoke to the audience, but focused her message on the young girls occasionally whispering to each other and excitedly capturing her on their smartphones. “I want all you young people here to listen and to learn from the women, and learn from their experiences. And then I encourage you as you succeed in your careers, because you will, that you find a conference like this and you get on camera and you tell somebody else, ‘you can do it, look what I did. You’re gonna be successful just like me’.”

One final note. Televisa Foundation Executive Director Alejandro Villanueva came up at one point to talk about the lack of STEM in novelas, and in Spanish television programs in general. And so, he said “I guess one of my favorite phrases is ‘learning to code is like having a superpower’, which I kept thinking over and over. So we decided to create what we call, ‘la cereza de pastel’, the cherry on the cake. We’re beginning to work on a new TV/web series where four young Latinas in middle school enter a technology competition.”

The name of this upcoming show? TECHNOLOchicas.