Eduardo Hilario / El Observador FanimeCon has come and gone with Memorial Day weekend and with it brought many people from around the country and world to the downtown area... 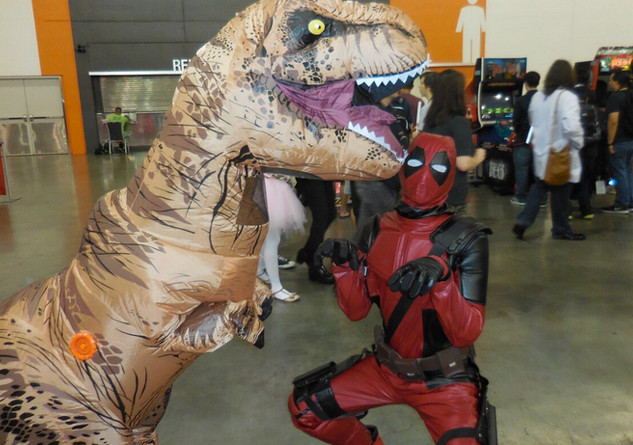 A T-Rex and Marvel character Deadpool pose together as part of the eclectic crowds that show up at FanimeCon. Photo Credit: Eduardo Hilario
by ElObservador 06/03/2016

FanimeCon has come and gone with Memorial Day weekend and with it brought many people from around the country and world to the downtown area of San Jose to get a huge taste of one of their most beloved genres, Anime. Some of you might be asking, What is Anime? To put it simply Anime is basically Japanese cartoons aimed for a more adult audience. With so many genres of Anime, it would take a very long time to cover all types of anime out there. FanimeCon is the premier event for all things Anime in San Jose and this year was no exception. With the fans comes one of the biggest aspects of the convention other than all things Anime, the cosplay, that being a form of dressing up where the costume is custom made and cannot be purchased as a whole. Let’s dive a little more into what is available at “Fanime”.

Cosplaying is one of the  main pillars of  Fanime. Most cosplays at fanime consists of people dressing up as their favorite character from their favorite Anime, but in recent years, more people have been dressing up as video game characters, comic book characters and the occasional guy or girl dressed up as a political figure. The wide variations of cosplays is fascinating to behold and an interesting conversation starter. The amount of time and detail put into cosplays puts them leagues ahead of any type of costume you can just buy as a whole.

Another big thing offered at Fanime are the panels, which are essentially big gatherings for fans to enjoy watching their favorite Animes, Q&A’s with prominent zAnime voice actors and producers, and fun gatherings where quizzes, games, and tutorials for drawing, animating and a plethora of other things, anime and gaming related. One of the panels I personally attended with a few friends is the Anime murder mystery, which was essentially a huge game of Clue where instead of the one murder happening, the killers work together to slowly eliminate the civilians to ultimately win the game. It was probably one of my favorite moments of the whole event.

Some other big things at the convention are the meetups, the dealers hall and the gamers hall. Meetups are huge events where cosplayers dressed up for the same anime/game get together to take tons of pictures and show off their cosplays. The dealers hall is, as the title says, a massive hall where dealers from all over the country come and sell their Anime/gaming products/artwork. Some things on sale include, Manga (Japanese graphics novels aimed at adults as well as children), Anime novels, Collectible figures, replica weapons, and Anime dvds. Finally, the gaming hall. Open practically 24/7, the gaming hall consist of every type of game. From card games to arcade games, the gaming hall is a great place to unwind from all the walking around the convention and if you’re in the mood to play a fighting game, rhythm game, or just watch people play dancing games.

Fanime is one of those events where people come to express their love and appreciation for Anime. To put it simply, an event by fans, for fans. I’ve been attending the event for the last three years, whereas most of my friends are 8-10 year veterans who know their way around the place. I have to say it is one of my, if not, my most anticipated event of the year. I enjoy seeing all the amazing cosplays, meeting all the friendly people, and generally converging for this special event that brings together people with the same loves.