PENS AND PAPER The Artwork of Frank Felix

Frank Felix, known by his social media handle ‘Shotgunarte’, is a Riverside California native who has become well known for his pen and pencil artwork showcasing cholas, the street... 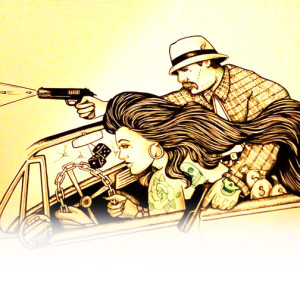 Frank Felix, known by his social media handle ‘Shotgunarte’, is a Riverside California native who has become well known for his pen and pencil artwork showcasing cholas, the street life, and the chicano culture of this state. His drawings and tattooing evoke the environments that he grew up in, sometimes with strong visuals that get the point across.

“I’ve been drawing since I was 8 years old, so I just never put down the pencil. Tattooing wise, I started in 2000 when I met my wife. She kind of pushed me into it.” After getting injured at his job, Felix and his wife at the time decided to take the plunge into creating a business built on art. The result is into its 15th year now.

Felix’s art is based a lot on his own experiences, his world and how he grew up in it. “I take inspiration from everything I’ve seen. I’ve been on my own since 13, I’ve been in the streets. I was a little gang member til I was 21, when I had my first kid.” This constant influx of street life and the good and bad contained within it is brought up in any of his drawings and tattoos, as evident on his Instagram photo account. Part gallery, part personal blog of sorts, it is here where Felix puts up updates of his life and his work.

All of it is pen or pencil on paper, no digital work for him. Although he does hold a degree in computer graphics he says, “I think sometimes you lose your soul in these computers and phones.”

In many of the short 15 second clips on the photo  site, oldies music can be heard in the background as he draws the intricate lines of the cars, hair and flannel shirts. This rare glimpse into his safe spot, his escape, is highlighted by his thoughts on why and how he ends up coming up with these figures. “It’s my release. I used to fight a lot in the streets, being an angry kid. Now as an adult I can’t go and beat up a person. It’s like it releases a bad part of me so when things are going on, people know that in my art it shows, it reflects what’s going on in my life at that point.”

Felix also stresses that the drawings are also important to others because of how it relates to their own lives. These aren’t just imagination but a reflection of what has and is happening to the fans that praise his pictures online, and purchase his products.

“The real turning point in my life was when I was 37, I had been drawing cholas and street stuff pretty much all my life. I lost one of my cousins and he was very close to me. A couple months later my wife left me. So I had to either let that consume me or put my all into my art.”

One of his art pieces, the Virgin Mary (as seen on the cover) helped him cope with the loss in his life. “The Virgin Mary that I drew tells a story. If you really look at the picture you’ll see a bunch of names, those are cousins I’ve lost on the streets.”

All those cousins he’s lost through the years have been part of his art and his life, giving him suggestions and watching him evolve. Now that they’re gone he says, “I don’t have a family support like that anymore, so I have to push myself to do it everyday. I get up everyday and I remember them, then draw. It was a big turning point, I could either fail or I could succeed by myself, and I have. For 4 years now.”

The Virgin drawing helped Felix meditate on his life and his goals. His reasoning for picking her to draw was that he connected to the idea of faith and her connection to Chicano culture. “Sometimes I feel like she’s sad. Thats why I put the extra stuff in there, because that’s day to day life. Not so violent, but we’re all going through our struggles. Sometimes you’ve got to tell a story while you’re drawing here.”

Felix’s future goals lie in opening up a shop for Shotgunarte, to sell his art and create tattoos, eventually bringing in other artists and their work. It’s all for his children, which he has seven of, five daughters and two sons. “A couple of them will be learning how to tattoo and take over the business.”

In the end Felix describes a perfect day for him as a congregating of he and his family, all the while drawing of course. “Pretty much I get up,  I’m either drawing or tattooing. (I) come home one day and all my kids are around. I love family, it’s just who I am. I do everything for my family. One day I’d like to come home and actually see all my kids together. Thats a perfect day for me. Family and art, you can’t beat that.”

Learn more at and .