GETTING MINORITY STUDENTS TO REACH FOR HIGHER EDUCATION 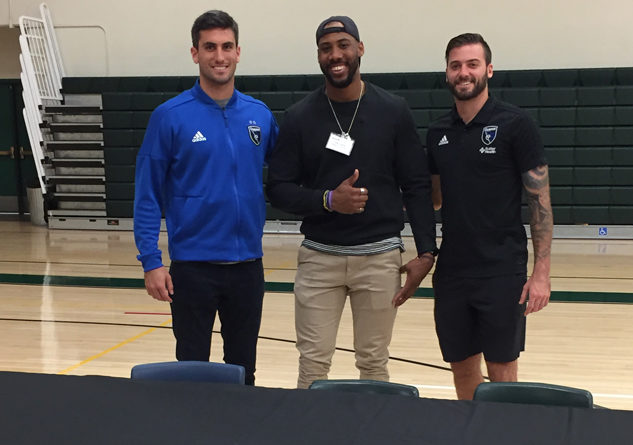 Magdalena Carrasco’s words were especially poignant for this group of students. Having grown up in East San Jose, and having worked as a social worker for 25 years in those neighborhoods, she told the students who asked how she got her start in politics that she saw so many struggling families in these neighborhoods through her job and nobody seemed to be doing anything about making their lives better. So she ran for office to do just that. She said she is the first in her family to graduate from middle school, high school and college. She emphasized the importance of college because college provided her with the credentials she needed to go back into her community as a professional to help families like hers.

The three athletes also emphasized the importance of college, pointing out that being a professional athlete does not last forever. Players need a “fallback” if they get injured, or when their careers end, which often happens in their 30s. That’s when a college degree comes into play. A number of students peppered the athletes with questions about their own goals of pursuing a sports career.

Corey Lemonier spoke about his career ambitions being cut short when he got cut from the 49ers, then from the NY Jets. He now is back in college pursuing a business degree, which he says will be much more helpful in building a career outside of sports.

Silicon Valley, with 120,000 students participating in college-focused activities from elementary through high school grades. There are even college-focused lesson plans for kindergarten students.

The goal is to create a college-going culture among students, and to inspire and support first-generation students in their pursuit of a college education.

Throughout the week, teachers introduce college-focused games and lesson plans in their classrooms.