All Violence is the Real Issue 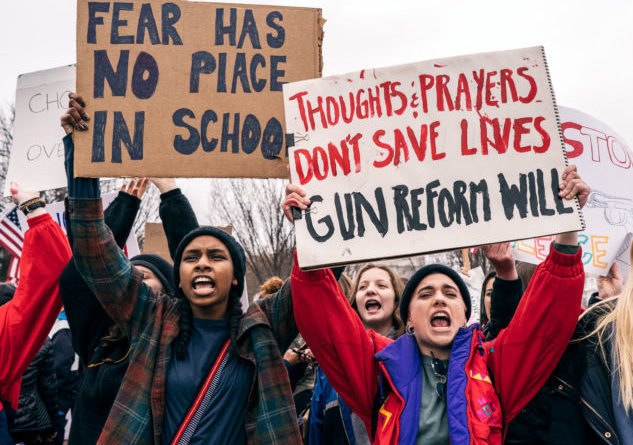 Violence is defined by the World Health Organization as “the intentional use of physical force or power, threatened or actual, against oneself, another person, or against a group or community, which either results in or has a high likelihood of resulting in injury, death, psychological harm, maldevelopment, or deprivation.”

Although the group acknowledges that the inclusion of “the use of power”, in its definition expands on the conventional understanding of the word. This definition involves intentionality with the committing of the act itself, irrespective of the outcome it produces. However, generally, anything that is excited in an injurious or damaging way may be described as violent even if not meant to be violence (by a person and against a person).

“Past president Corlin, American Medical Association, said: “The United States leads the world in the rate at which its children die from firearms.” He concluded: “Gun violence is a threat to the public health of our country. For each single death due to violence, there are dozens of hospitalizations, hundreds of emergency department visits, and thousands of doctors’ appointments.”

“Furthermore, violence often has lifelong consequences for physical, mental and behavioral health and social functioning and can slow economic and social development.”

“In 2013 assault by firearm was the leading cause of death due to interpersonal violence, with 180,000 such deaths estimated to have occurred. The same year, assault by sharp object resulted in roughly 114,000 deaths, with a remaining 110,000 deaths from personal violence being attributed to other causes.”

“Violence in (its) many forms is preventable. There is a strong relationship between levels of violence and modifiable factors such as concentrated poverty, income and gender inequality, the harmful use of alcohol (substance abuse), and the absence of safe, stable, and nurturing relationships between adults or children and (their) parents. Strategies addressing the underlying causes of violence can be effective in prevention of violence.” (Source: Wikipedia)

On Wednesday, 03.14.18, throughout this nation, students held 17-minute rallies to memorialize those 17 individuals who died at Marjory Stoneman-Douglas School, Parkland, Florida a month ago. Unlike many prior massacres since the 1999 Columbine shooting in Aurora, Colorado, this time student body leaders spoke up eloquently and directly. They effectively said, “Enough: Never Again.” David Hogg, a senior journalism major, had interviewed fellow classmates during the CODE RED lockdown while all students and teachers had secured and barricaded themselves in storerooms out of gunsight alignment of that AK- 47 used by the ‘shooter’ who was a former student with a history of being a ‘loner’. The videos and social media blogs went viral.

For years these MASS SHOOTING GENERATION survivors had practiced fire drills & CODE RED lockdowns with ‘barricade and secure’ protocols designed to minimize killings, wounded, and collateral damages. They had just experienced the same ‘combat anxiety & fear’ as had youth in Mid- Eastern war zones. American society has its own domestic terrorism impacting our youth with its gun- violence.

Their direct communication stunned legislators and NRA spokespersons because these survivors had nothing to lose when saying “ENOUGH-NEVER AGAIN” …Our nation needs ‘GUN CONTROL’ or ‘GUN REGULATION’. Schools need to be secure and safe to enhance the learning process without becoming armed fortresses.

Adults have not done anything because the NRA lobbyists have thwarted the legislative process to ensure profitable gun sales continue unmonitored and unimpeded by licenses and regulations. The Second Amendment rights must be redefined to eliminate sales to those who never should be able to purchase a military AK- 47 automatic rifle.

Those Parkland students organized walkouts happening throughout the nation. They also partnered in solidarity with ‘Moms Demanding Action’ (a gun-control advocacy group); and with the next Women’s March scheduled for March 24, 2018.

Youth across the nation made clear that they are critical thinkers, they explore solutions, and are agents for the change they wish to see in this world. They will as us adults to ‘do our jobs’ in full transparency or get out of their way. Their conscious integrity and idealism has not been corrupted with fake facts, false idols and mercenary goals.

Their tactics were adopted and used by Alum Rock Union School District students in partnership with Somos Mayfair (an NGO-CBO non- profit) in San Jose, CA. “About 400 students and staff walked out from Alum Rock Union School District schools on International Women’s Day, to shine light on the ongoing and unscrupulous abuses that ARUSD Board members have carried out for many years.”

“Joined by many parents, this action occurred in response to last week’s special Board session where community members feel they witnessed a fundamental breakdown of democratic norms and were exposed to the complete incompetence of the Board majority.” (Source: Z. Rodriguez, Email: March 8, 2018-7:06 PM; “DISTRICT WALKOUT PRESS RELEASE-400 students and parents take the streets!”)

There is a great need to address ‘VIOLENCE’ in its forms wherever it happens. Gun violence will be mitigated, especially massacres, when military grade automatic weapons are not easily available. Those nations (Japan, Australia, U.K., Ireland) which have no automatic weapons accessible to their residents have had no massacres.

Other forms of violence, including verbal abuse, need to be addressed. After all it takes a community to educate and train their youth. In schools, communities must provide ‘a safe learning environment’…kids do not learn when hungry, fearful, and distracted.

The proposals which would place armed police in schools; train teachers to use weapons; convert a school into a fortress all neglect the violence that happens in the community where their youth (students) live. Domestic- family violence, abuse of women… all types of violence need to be addressed.

Diverse communities need to establish common core values which are practiced so as to create a peaceful, safe living environment which enables social interactions; religious events; and commerce to thrive.

Those MSG high school students are correctly conveying the message that ‘enough gun violence’ has happened; that community leaders need to decide which is more important: The safety of our kids in school or the profits from gun sales.

What they have done is a great service to this nation: We now know that we have to deal with all forms of human abuses: personal, physical, verbal, poverty, sexual harassment, wage disparities, etc… all of which happen in the community where families live and nurture their children… who when educated and trained end up being our future. Let’s begin to deal with all of it… on the streets, in the community… not just in the schools. Because wherever it happens: abusive VIOLENCE IS THE REAL ISSUE, ESPECIALLY WAR.