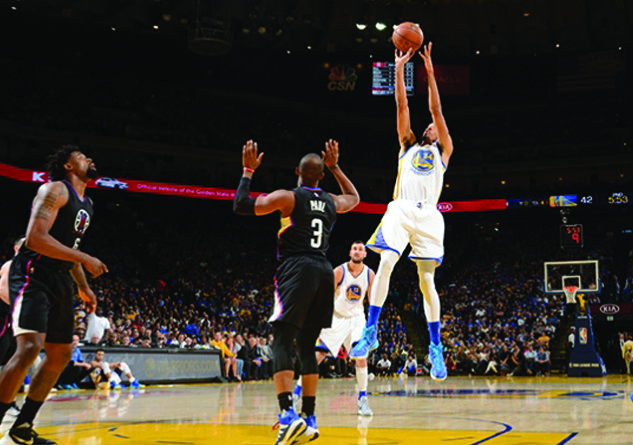 The Warriors swept the season series over the Clippers after earning a 114-98 victory over Los Angeles on Wednesday night. Stephen Curry scored a game-high 33 points while Klay Thompson wasn’t far behind with 32, as the Splash Brothers combined for 11 three-pointers. Draymond Green notched his 11th double-double of the season with 12 points and 12 rebounds and Shaun Livingston tallied 11 points off the bench. With the victory, Golden State improves to 64-7 on the season.

As has been the case in each prior meeting between the two teams this season, the Clippers hung tough, but it was the Warriors who came out on top in the end. Los Angeles got off to a good start, racing out to a 6-1 lead before Stephen Curry and Klay Thompson converted back-to-back baskets to ignite a 9-2 Golden State run that would put the Warriors up 10-8 halfway through the opening quarter. Doc Rivers put several members of his bench out on the floor, and they responded by outplaying Golden State through the remainder of the frame. Jamal Crawford’s three-pointer with 6.7 seconds left gave Los Angeles their largest lead of the night at 28-21 before Curry’s layup with 2.2 seconds remaining sent the game into the second quarter with the Clippers up by five.

Austin Rivers scored on consecutive possessions to put Los Angeles up 32-31 with 9:11 left in the half, but that would turn out to be their final lead of the night.

Shaun Livingston followed back-to-back Harrison Barnes’ three-pointers with a pull-up jumper to regain the lead for Golden State, and the Warriors never looked back. It wouldn’t be a runaway, however, as the Clippers remained within a basket or two through the remainder of the half. After Curry put Golden State up 51-46 with 2:01 left, Paul Pierce scored the final points of the quarter on a three-pointer with 14.9 seconds remaining to send the game into halftime with the Warriors holding a slim 51-49 advantage.

Golden State shot out of the gates to begin the second half, opening the third quarter on a 10-1 run and holding the Clippers without a field goal for nearly the first four minutes of the frame.

A 5-0 Los Angeles burst within a span of 62 seconds cut the deficit to 73-64 with 3:18 remaining in the quarter, and that would be the difference heading into the fourth quarter as Chris Paul’s running three-pointer beat the quarter buzzer and kept the Clippers within shouting distance at 81-72.

A 9-2 Warriors run to begin the fourth quarter put Golden State up 90-74 with 9:06 to play, matching their largest lead of the entire game. The Clippers would immediately respond with nine-straight points to pull within 90-83, but the damage had been done. Klay Thompson scored the next seven points for Golden State, rebuilding their lead to double-digits halfway through the final quarter. The Warriors’ lead would only grow from there, as the Dubs seemed to score at will in the final minutes.

Thompson’s seventh and final three-pointer of the game with 18.9 seconds remaining closed out the scoring and secured the 114-98 victory. With the win, the Warriors improve to 64-7 on the season. They’ll continue their four-game homestand on Friday when they host the visiting Dallas Mavericks for the final time this season.